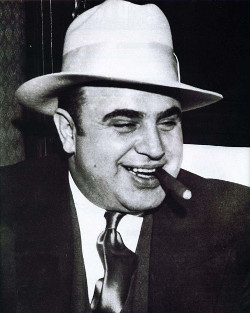 One of the first iconic American gangsters of the 20th century.

Alphonse Gabriel Capone was the fourth son of first-generation Neapolitan immigrants. Born in New York City, Al dropped out of school and let himself be caught up in street gangs, and as an adult brought himself to the attention of racketeers Frankie Yale and Johnny Torrio. Torrio would subsequently invite Capone to join him as a partner when he took over the businesses of Chicago crime lord "Big Jim" Colosimo and expanded his operations to take advantage of the lucrative career of bootlegging created by the passing of 18th Amendment in the United States, banning the manufacture, importation, and sale of alcoholic drinks.

Torrio and Capone established a monopoly for illegal activities in the nearby town of Cicero, but still were caught up in a mild turf war against Irish-American bootlegger Dion O'Banion. When O'Banion was murdered, all hell broke loose amongst the gangs in Chicago as his subordinates sought revenge and Torrio, a pacifist who would narrowly survive an assassination attempt during the events, opted to abandon Chicago and leave all his operations to Capone.

Capone brought things under control with the murder of O'Banion's successor, Hymie Weiss, and set about establishing himself in the establishment of Chicago.

Things started going downhill again when Capone had seven rival gangsters killed in the 1929 Saint Valentine's Day Massacre, bringing him unwanted national attention (though, that said, there is some speculation that he was innocent of that particular crime). The Federal government finally stepped in, assigning Prohibition enforcer Eliot Ness to do some damage against Capone with his handpicked team of incorruptible agents nicknamed The Untouchables, while investigations into his massive secret income for the purpose of tax evasion charges were underway.

Capone finally went to trial in 1931 and, after his attempt to fix the jury failed, he was convicted as a tax cheat. During his imprisonment, a latent case of syphilis he had developed finally hit the tertiary stage, and the damage to his nervous system completely destroyed him. He was released in 1939 and died eight years later.

Not a member of The Mafia, although his organization, the Chicago Outfit, as well as Capone himself, sat on The Commission. Within a few years of his rise to power, the ethnic divisions in the American mob effectively became meaningless.

Retrieved from "https://allthetropes.org/w/index.php?title=Al_Capone&oldid=1767493"
Categories:
Cookies help us deliver our services. By using our services, you agree to our use of cookies.