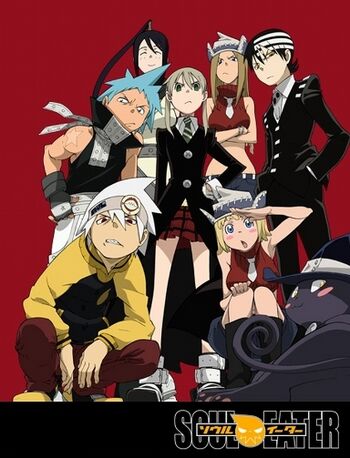 Not pictured: the man wearing an over-sized bear mask who can turn into a mirror that's wielded by a monkey in a baseball cap. It's that kind of series.

Soul Eater is a Shonen manga by Atsushi Ookubo which has been regularly serialized in Monthly Shonen Gangan since 2004. It received a 51 episode anime by Studio BONES in 2008. As of January 2011, Monthly Shonen Gangan has ran a Prequel/Spin-Off named Soul Eater Not! by the same mangaka, running alongside the original series while covering and expanding on events prior to the original story.

In Death City, Nevada, Death himself (or "Shinigami" in Japanese) has set up the Death Weapon Meister Academy, aka DWMA (also known in Japanese as "Shibusen") to train warriors called meisters along with weapons who can take human form. Their enemies include corrupt human souls, Wicked Witches, and the demonic Kishin, who are created when a human goes insane with "madness". A meister and weapon who manage to defeat and collect 99 corrupt souls (plus one witch soul) get the highest honor; the weapon becomes one of the Death Scythes, servitors of Shinigami-sama himself.

The main characters include:

The series is basically what happens when the plots of Shaman King and Harry Potter are pulsed together in a blender, Studio BONES is put in charge of the animation, and what appears to be the world's biggest Tim Burton fan is hired as animation director. It should be noted that the anime deviates from the source manga midway through the series.

The anime was acquired by FUNimation, with tantalizing previews on their website. All of the episodes are viewable on Netflix, their Video Portal (which is only viewable... In America...and Canada) and their YouTube channel.

It's worth noting that the "Book of Eibon" is a reference to H.P. Lovecraft. The author being a fan would give a new perspective on the series' focus on madness, power, and godhood, especially portraying madness as something akin to an infectious disease.

Tropes used in Soul Eater include:

Warning: The following tropes are from both the Anime and the Manga. Be VERY careful with spoiler text.

Retrieved from "https://allthetropes.org/w/index.php?title=Soul_Eater&oldid=1682392"
Categories:
Cookies help us deliver our services. By using our services, you agree to our use of cookies.