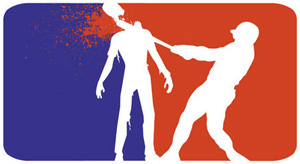 Not authorized for rebroadcast without the express written consent of Zombie League Baseball.

Baseball bats are popular weapons. They're commonly considered as such in Real Life in any country where baseball isn't that big. Hell, it's sort of like that even in the ones where baseball is a big deal. Brits or Aussies could substitute a cricket bat—artfully described on the Cricket Rules page as "flat on one side, making it ideal for hitting people who owe you money without leaving a bruise. The flatness also gives it edges, for when you do want to leave a bruise".

Overlaps with instances of Improbable Weapon User, Weapon of Choice and Improvised Weapon. Subtrope of I Know Madden Kombat.

Telephone Polearm is a subtrope for very large instances instances of this.

Examples of Batter Up include:

Retrieved from "https://allthetropes.org/w/index.php?title=Batter_Up&oldid=1865036"
Categories:
Cookies help us deliver our services. By using our services, you agree to our use of cookies.