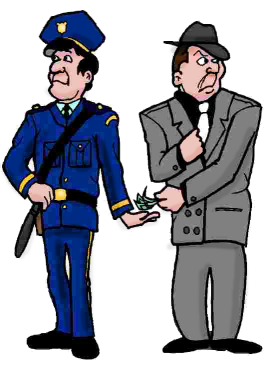 How did these people manage to get themselves in a uniform instead of being locked up behind prison bars seems to be a miracle. The dirty cop often appears as a villain in both Cop Shows and Crime-Time TV. Brutal, fascist, and often on the take from the local mob, this cop makes most criminals and prisoners look like...well, saints.

All too often an example of Truth in Television. May escalate to Bad Cop, Incompetent Cop for entire precincts.

See Blackmail Is Such an Ugly Word, Cut Himself Shaving, Rabid Cop, Prison Rape, Corrupt Hick, etc. If a cop's framed as one of these, it's Police Brutality Gambit. If a cop outright murders people, you've got a Killer Cop.

If it is just a facade and the cop secretly has a heart of gold, it's Noble Bigot with a Badge.

Examples of Dirty Cop include:

Retrieved from "https://allthetropes.org/w/index.php?title=Dirty_Cop&oldid=1964117"
Categories:
Cookies help us deliver our services. By using our services, you agree to our use of cookies.