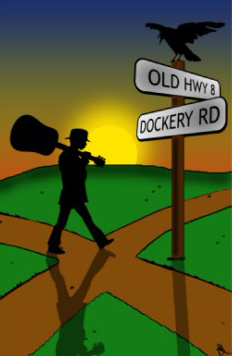 "Two roads diverged in a yellow wood..."
—Robert Frost, The Road Not Taken

Just like bridges, crossroads often feature as the setting for portentous happenings - there's something symbolic about the (often ancient) intersection of two paths that gets people's imaginations going. Often they are used to represent the intersection between two worlds.

Crossroads also tend to represent places where a character can make a life changing decision, especially if there is conflict over which path to take.

This is very popular with FairyTales - especially associated with The Devil or The Fair Folk. This is a common place for a Deal with the Devil.

Examples of At the Crossroads include:

And that has made all the difference.