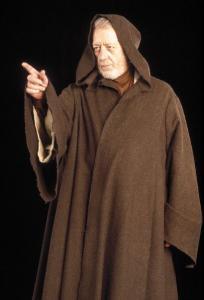 This is not the trope you're looking for.

A mentor who travels with the main character and often has some sort of magic powers or at least a brilliant mind. Even though this character is better skilled, faster and more experienced than the protagonist, they aren't The Hero, either because they are not The Chosen One or because they have already grown too old for the task. Their role is to introduce a new skill or sharpen the current skills of the protagonist, often hoping to pass the torch because they know their career is coming to an end. Expect him to have a very calm attitude as if he has wisdom that he will give out in his own due time.

This character will almost always die so that the protagonist can learn to stand on his own two feet. Their death will also be a great motivator as it gives the protagonists a chance for vengeance. Afterwards, they'll usually become a Spirit Advisor, either as a literal "spirit" or in flashbacks. If they don't die, they will stick around giving advice, but not actively adventuring (unless Gondor Calls for Aid).

The Obi-Wan can also play Mr. Exposition and as The Chooser of the One.

The Obi-Wan is an Archetypal Character. The Big Brother Mentor is a subtrope that happens when the Obi-Wan is older, but not too much older, than the protagonist. If the character is simply demoted early on in the plot, he's only The Obi Wrong. For more information concerning "The Mentor" and other narrative archetypes, see Vladmir Propp's theory of narrative. Compare Big Good where they tend to keep a distance on the hero's quest and run things from the throne.

Named for Obi-Wan Kenobi in Star Wars, who bites it at the end of Act 2 in an Obi-Wan Moment, Passing the Torch to the young hero who then goes on to avenge his death.

Examples of The Obi-Wan include:

Retrieved from "https://allthetropes.org/w/index.php?title=The_Obi-Wan&oldid=1712936"
Categories:
Cookies help us deliver our services. By using our services, you agree to our use of cookies.