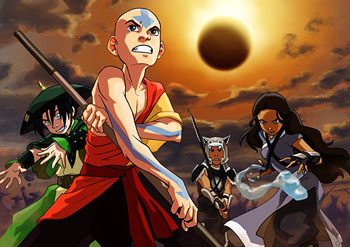 "But I believe Aang can save the world."

Avatar: The Last Airbender, also known as Avatar: The Legend of Aang in some countries, takes place in a Constructed World divided into four nations: the Water Tribes, the Earth Kingdom, the Fire Nation, and the Air Nomads. Each nation has developed a spiritual art form to manipulate ("bend") their namesake element, but only the Avatar -- one person reincarnated into a member of each nation in turn -- is capable of mastering all four elements. The Avatar's role is to serve as a peacekeeper and protector for all four nations, as well as bridging and balancing the physical and spiritual worlds.

The show's story centers around Aang, a twelve-year-old (chronologically 112) who is the most recent incarnation of the Avatar and is the eponymous "last Airbender", and his quest is to master the four bending arts so that he can save the world from Fire Lord Ozai and end the century-long war that he spent a hundred years trapped in an iceberg accidentally avoiding. Ozai's plans for domination are on a specific timetable, though, meaning that Aang has until the end of summer to stop them.

Aang has thankfully found himself in good company with teenage Waterbender Katara and her brother Sokka, who were the ones who freed Aang from the iceberg. As the trio works to save the four nations, they gain more allies; take a look at the Character Sheet to get to know more about the cast.

The first season was adapted into a live-action film directed by M. Night Shyamalan -- The Last Airbender -- which is the second Shyamalan film to be inspired by a Nickelodeon show. The film was intended to be the first season in movie form, with the hope that a pair of sequels based on the other two seasons would follow. The film was not generally well-received, nor is it a good entry point for viewers new to the franchise. Watch it after the show, or not at all.

A Sequel Series, The Legend of Korra, premiered April 14, 2012. The sequel series takes place seventy years after Avatar and focuses on the next Avatar, a hotheaded waterbender named Korra -- while learning airbending from Aang's son Tenzin, Korra finds herself in Republic City, a metropolis (inspired by the Roaring Twenties) in the former colonies which suffers from rampant crime and an anti-bender revolt.

Nickelodeon has also released a digest graphic novel called The Lost Adventures (which includes the out-of-print Expanded Universe strips), and later released a graphic novel trilogy in 2012 called The Promise, which details the Gaang's rebuilding of the world as a bridge to Korra; both of these projects were published by Dark Horse Comics.

This show is not to be confused with other meanings of the term "avatar".

Due to the sheer number of trope examples, they have been divided into their own alphabetized pages. There is also a largely-complete recap page available for those who want to see what all the fuss is about.

There is also an entire page of memes.