Before and After Pictures 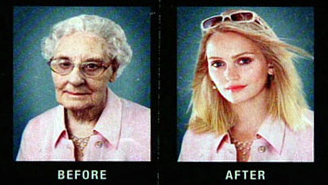 This product will make you look years younger.

You've got a product that you want to sell. What better way to sell it than showing what a difference it has made to your clients! This is especially true of beauty or health-related products, where the change might be visible. Of course, the change should be made to look as dramatic as possible. And we're not talking about merely showing realistic change, this is advertising!

Before and after photos are a staple of many sorts of advertisement, but especially diet drugs, er, I mean supplements. The need to make the change look as dramatic as possible leads to a number of standard features found in most examples, little cheats to heighten the change.

The pictures are invariably of women, unless the product is designed solely for men. If many sets of B&A pictures are used (either in a single ad or across a series of ads), a few may be men, but most will be women. The person will...

Naturally, you're not supposed to think about how much better the Before picture would look with all the advantages in the After.

When simply jiggering the photograph isn't enough, there are various other ways to make your product look more effective than reality can produce. Using two different models is common, but delves into Outright Lie.

Cleaning product ads often use the same kinds of tricks to make one product look more effective than another.

Given that this trope is practically universal in the appropriate advertising, only particularly Egregious examples should be listed.

Examples of Before and After Pictures include:

Retrieved from "https://allthetropes.org/w/index.php?title=Before_and_After_Pictures&oldid=1667307"
Categories:
Hidden category:
Cookies help us deliver our services. By using our services, you agree to our use of cookies.