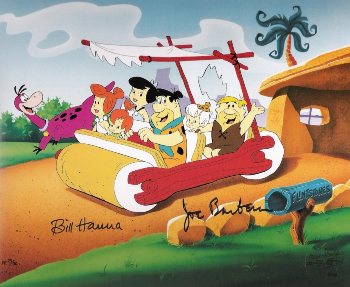 The most famous and beloved of Hanna-Barbera's cartoons that isn't Scooby Doo, this one was set in the Stone Age -- sort of -- and based about half its humor on prehistoric versions of modern technology. Usually an animal was shown rigged to perform some menial task, eg a baby mammoth used as a vacuum cleaner, a parrot used as a recording device, etc. Said animal usually makes an Aside Comment about their situation.

The other half was ordinary sitcom material, springing from the antics of boorish Fred Flintstone, who was constantly hatching insane schemes with the help of his neighbor Barney Rubble and subsequently getting them both into trouble with their wives, Wilma and Betty. Later in the series the Flinstones had a daughter, Pebbles; this inspired the Rubbles to adopt a son, the comically super-strong Bamm-Bamm. Dino and Hoppy were the respective family pet(-asaurus)es.

Was the most successful prime-time animated series ever until The Simpsons.

Like many very popular shows from the 1960s and 1970s, The Flintstones just would not die. It survived cancellation in any number of subsequent forms, from Saturday morning cartoons featuring teenaged versions of Bamm-Bamm and Pebbles (the latter voiced by Sally Struthers) through a pair of live-action motion pictures, all the way to a breakfast cereal which is still marketed in the early 21st century (and which is the occasion for continuous new Flintstones animation). Not to mention the vitamins...

Is also going to receive a reboot via Family Guy creator Seth MacFarlane. No, really. Though this project has been in Development Hell for some time now (and will hopefully remain there forever).

The various incarnations of the Flintstones in the media:

Retrieved from "https://allthetropes.org/w/index.php?title=The_Flintstones&oldid=1833415"
Categories:
Cookies help us deliver our services. By using our services, you agree to our use of cookies.