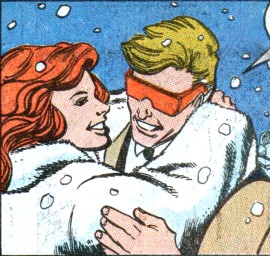 A Hero gazes lovingly with his beautiful Redheaded Heroine.

Love Interests have always been Color-Coded for Your Convenience. Traditionally, the hero's significant other would usually be a blonde, to contrast with the brunette Vamp or Femme Fatale. But today, the passive Damsel in Distress and Shallow Love Interest have been replaced by the sassy, bold, brash, sharp-tongued Action Girl and Well, Excuse Me, Princess!—easily compatible with the "spunky Fiery Redhead" stereotype.

The hero's redhead is actually calm, at least most of the time. When she is fiery, she will probably be making him work to win her over for a long time or he won't realize that she's the one for him until the end.

Considering that less than 1% of the world's population have red hair (largely confined to the Anglo-Irish sphere, and even there, it only tops at Scotland's 13% of the population, and, oddly enough, this is also found in many Jews), there is a disproportionate number of red-haired female characters out there, and an inordinate number of them are The Hero's winning Love Interest. (On top of that, she is also inordinately likely to have green eyes to go with it.)

Naturally, it's quite common for the Veronica in a Betty and Veronica Love Triangle to be a redhead; the Betty will be a blonde.

One possible source is Robert A. Heinlein's fondness for hypercapable redhaired heroines (he had a red-haired wife).

In European comics, the high proportion of redheads among the protagonists has been explained by some authors by the simple fact that, since redheads are rare, they're easier to spot in the panels — especially true for crowd scenes.

Look out for the large number of Dark Skinned Redheads in Anime.

Perhaps surprisingly to outsiders, given the (relatively) higher proportion of Irish redheads, this trope does not seem to exist in Ireland. Redheaded female leads do appear, of course, but they are heavily outnumbered by the more common blondes and "Dark Irish" brunettes. This may be that, unlike almost everywhere else, red hair is not really seen as especially "exotic" in Ireland and Irish-made media reflects this.

There isn't always a reason for this; if there is, sometimes, the red hair is symbolic of love and romantic desire, or the author just finds girls that look like that appealing.

There are some cases where the redhead actually is The Hero. Please note that not every romance involving a red-head falls under this trope. A Redheaded Hero will probably end up with someone. Only when he is heroic, perhaps a superhero or her personal hero from something, and ends up with a girl with red hair, or has multiple Love Interests to chose from but the redhead fits best with him, and/or the blonde or brunette express an extra attraction to their partner's red hair is the trope in effect.

Oh, and this can apply to Evil Redhead, overlapping with Dating Catwoman.

Examples of Heroes Want Redheads include:

Retrieved from "https://allthetropes.org/w/index.php?title=Heroes_Want_Redheads&oldid=1919876"
Categories:
Cookies help us deliver our services. By using our services, you agree to our use of cookies.