The method of intentionally employing a black-and-white palette as visual shorthand. 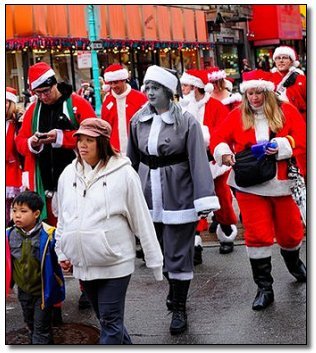 Not Photoshopped, but performance art. (Source)

A wide spectrum of meanings

Like many forms of visual shorthand, Deliberately Monochrome communicates complex ideas in an easy-to-digest package. Through its stark contrast and cultural cachet, black-and-white movies and standalone TV episodes have remained popular in a few genres and story niches that can pull it off without seeming pretentious. Its uses vary, but these works are deliberately desaturated to complement the general mood and theme of the Film.

Works set in the 19th or early 20th century, particularly historical films or homages to historical films, tend to use black-and-white or sepia tone to invoke the appearance of early photography or television. In typically colorized films, a switch to black-and-white can denote a Flashback or other such jump to the past. It's not uncommon to parody this usage of black-and-white by claiming that the real world actually was black and white prior to the invention of color.

Works set further back in time are increasingly less likely to use desaturated palettes, as using the effect before the invention of photography creates a rather confused metaphor.

While no genre has a lock on black-and-white, the likeliest to use it are Film Noir and detective stories. The themes that can be expressed or heightened with black-and-white are generally moral ambiguity, Zeerust, mystery, drama and tragedy. Because the classic period of Film Noir was in the 40's and 50's, this stylistic choice also overlaps with Monochrome Past.

Too Incompetent to Operate a Blanket

In infomercials, Deliberately Monochrome signifies the "old-fashioned" (and usually inferior) way of doing things. The woman tangled in a mess of cling wrap or cutting her fingers off while paring potatoes with a knife will usually be in black-and-white, while the woman easily covering leftovers with a Covermate or "peeling" a potato with the Handy-Peel will be in full color.

Desaturating the color of a film can be used to mimic the look of older films, particularly colorized black-and-white films or faded prints of color films. This has led to use of Sepia tones (browns and tans that mimic faded photographs) to indicate the scene in question is a flashback. Combining a Desaturated picture with Splash of Color can result in a Limited Palette.

Often used as a "trip down memory lane" effect, this occurs in film or TV shows (usually referencing a film) when wishing to confer an obvious stylistic nod to the black-and-white era of moviemaking upon the audience. A simple trick, the saturation (color) of the effect is slowly drained until the picture is completely monochromatic or grey, just like all those Film Noir pictures of the 1940s and 1950s. The effect can also be used more subtly, with only a slight change of hues and saturation to simulate the effect of a dream (fuzzy edges), fantasy (usually with a cloud) or flashback sequences as required.

This is when a work exclusively uses one or two recurring colors shown in full vibrancy, and grayscale for everything else, resulting in what resembles a moving "paint-by-numbers" picture with only a couple colors filled in. The colors themselves inform roughly what emotions or themes are present in the work; for example, limiting the color palette to red can indicate a violent world, whereas sticking to shades of blue can convey a melancholy atmosphere. This is why a common Flashback Effect is to use a limited palette of warm colors to signify happy and old memories. Until the tragedy kicks in, anyway.

Whereas a Limited Palette work employs a restricted set of hues throughout, a work employing the Splash of Color technique restricts the use of color to a select few characters or objects. These strategic and recurring uses of color in an otherwise black-and-white film serve as a visual grab to direct the audience's attention to points of interest, such as the MacGuffin, the Femme Fatale or the Chekhov's Gun.

Examples of Deliberately Monochrome include:

Retrieved from "https://allthetropes.org/w/index.php?title=Deliberately_Monochrome&oldid=1946470"
Categories:
Cookies help us deliver our services. By using our services, you agree to our use of cookies.