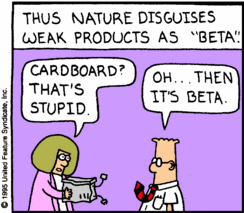 Before bringing out a product—in this case, specifically a game or program—it must be tested. The stages of testing are typically called Alpha and Beta, but may include Gamma in some companies. Alpha testing is done by the developers themselves, while Beta testing is done by a specific, outside team called Quality Assurance. In late phases of beta testing (this phase rarely called "Gamma" or "Open Beta"), select members of the public are allowed to test the game. During Alpha and Beta tests, those doing the testing seek out bugs, note them down, and forward them to the parties responsible for fixing them. Those developers then either fix the bug, delay the fix due to whatever time or business constraints, or declare it as "will not be fixed". Ideally, testing will last long enough to fix the most noticeable bugs.

However, sometimes, this isn't the case. Software may be rushed for any number of reasons, which may include: a holiday release, desire to compete with another company's product, a studio's closing, or outright laziness. When this happens testing can be shortened or outright skipped. This results in buggy, unstable programs that no one likes.

Companies take note: Spending time fixing any errors before releasing a program is a lot easier than trying to fix them after it's released. It results in fewer complaints, too! One of problems is that marketing and development are done by different people and sometimes even different companies. Once the publisher starts to nag the developer, rushed games happen...

On the other hand, companies may have to do this, particularly small ones. Not all companies have enough time, discipline, or money to go through all the development stages for what they're planning, and so have to release in the hopes enough people will buy it to get them going to go through the rest of the stages for them to better perfect it and then get attention to those changes to make more buy it later.

Naturally, the Obvious Beta skips the regular testing to go straight to release. In extreme cases, games have gone straight to release before it even enters the testing stage at all. To add to some confusion, the current paradigm in mainstream development renames and redefines some testing stages. Alpha for instance can be (depending on the company) used to denote a technically finished product (it's feature complete and could theoretically ship though it's probably still got issues of varying degrees) while beta can be used to note the same only with far less game-breaking bugs. Thus when the players talk about betas and a finished product with a developer, it can often mean two dramatically different things.

See Beta Test for more on the process and see Perpetual Beta for when the developers no longer have an excuse.

Examples of Obvious Beta include:

Retrieved from "https://allthetropes.org/w/index.php?title=Obvious_Beta&oldid=1949387"
Categories:
Cookies help us deliver our services. By using our services, you agree to our use of cookies.