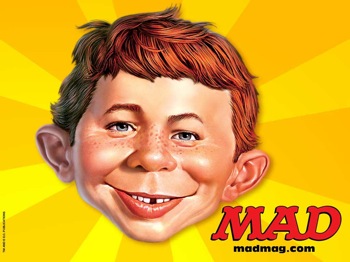 For decades a key influence on parodists and satirists in all entertainment media, Mad began in 1952 as a full-color Comic Book, Tales Calculated to Drive You Mad, published by EC Comics. Harvey Kurtzman, the founding editor and writer, began by satirizing popular comic book genres of the time (horror, crime, SF and adventure), but soon found his niche concentrating on parodies of specific comic books and strips, TV shows, films, and classic literature, as well as broader satire of American pop culture. EC artists, such as Jack Davis, Will Elder and John Severin, accustomed mostly to drawing in a "serious" style, were encouraged to cut loose for Mad, resulting in panels filled to capacity with outrageous caricatures, physics-defying antics, gross-out humor and innumerable background signage gags.

In July 1955, with issue 24, Mad became a black-and-white magazine (only to become color again in the 2000s). Contrary to popular belief, EC did not do this in order to escape the Comics Code. Rather, Kurtzman had received an offer from the more lucrative magazine market, and so EC publisher Bill Gaines proposed the change in format in order to retain him. Nevertheless, the new medium benefitted from the lack of censorship, as well as the broader range of subject matter and media available (including prose and photo features). By late 1956, Mad had become EC's only surviving publication. As history shows, it was more than enough for the company to prosper with.

In the late 1950s and early 1960s, Mad began to take on its most familiar (and commercially successful) form, with a long-lasting team of core writers (Jerry DeFuccio, Dick DeBartolo, Frank Jacobs) and artists (Don Martin, Al Jaffee, Dave Berg, Mort Drucker, Angelo Torres, Antonio Prohías) and a willingness to take on any target it felt it could get away with (see above quote). More recent contributors (since the 1980s) include writers Desmond Devlin, Arnie Kogen, Michael Gallagher, Charlie Kadau and Joe Raiola, and more recent artists include Tom Bunk, Rick Tulka, Tom Richmond and James Warhola.

After 67 years, Mad (now published by DC Comics) lacked the circulation and cultural impact (and some would say quality) it had at its peak, and the company announced that the August 2019 issue would be the last regular issue with new content and the last issue available on newsstands.

All the same, entertainment figures and critics ranging from Matt Groening to Roger Ebert to Patti Smith to "Weird Al" Yankovic have cited Mad as a major influence.

Tropes used in Mad include:
Retrieved from "https://allthetropes.org/w/index.php?title=Mad&oldid=1733910"
Categories:
Cookies help us deliver our services. By using our services, you agree to our use of cookies.