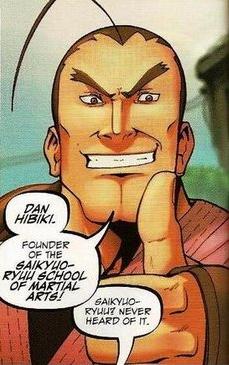 The Streetest Fighter... in his head.

A character with a comically over-inflated image of himself. He thinks he's smarter than everyone else, thinks he's a real lady's man, thinks he's cool, it's all about him, but both his fellow characters and the audience know that this coolness is all in his mind.

This is a slightly different phenomenon from shows (like Seinfeld) where essentially all the characters are like this and there are no "good" characters with which to contrast them.

Often occurs in conjunction with a Show Within a Show. If the TV Series runs long enough, the writers usually devote one episode to a Big Ego, Hidden Depths examination of the character.

Expect this guy to be a victim of Pride.

If the character is a nerd and unaware of it, he's an Extroverted Nerd. If he makes a big deal of how heroic and Badass he is, but runs at the first sign of real danger, he's a Miles Gloriosus. If he claims to be a genius, but is incredibly dim or just misinformed, he's the Know-Nothing Know-It-All. If he thinks he's a brilliant artist but is actually dire, he's Giftedly Bad. If he claims to kick ass only to get his own ass constantly kicked, he's a Boisterous Weakling. Contrast Insufferable Genius (where he actually has the skill to back himself up) or Almighty Janitor. Many a Narcissist and Pointy-Haired Boss is afflicted with this condition. Every Year They Fizzle Out and Fake Ultimate Hero, meanwhile, are when everyone else are the ones with a high opinion about the person in question. Often a Large Ham. In more serious works, he will often be the victim of Break the Haughty. The Smug Snake could be considered a villainous variation. Might be a Paper Tiger.

If (s)he is the main character on a show, we're dealing with a species of Unsympathetic Comedy Protagonist. If the writers, not the character (though he can fit this trope, underscoring his unpopularity) think the character is amazing, we have the Creator's Pet.

Contrast with the Jaded Washout, who knows only too well how pathetic he is. Not to be confused with the other kind of ego.

Here are but some people whose egos are vastly disproportionate to their accomplishments:

Retrieved from "https://allthetropes.org/w/index.php?title=Small_Name,_Big_Ego&oldid=1872521"
Categories:
Cookies help us deliver our services. By using our services, you agree to our use of cookies.