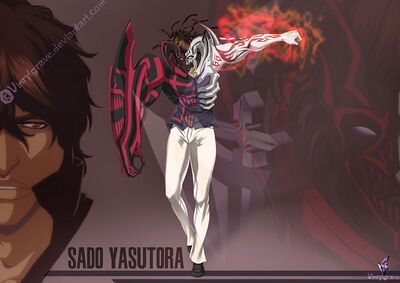 Ah Chad, if only you were this awesome in the actual manga.

Most commonly sourced from animation (both North American cartoons and Anime), since by nature animated characters are designed to be easy to draw. People with an interest in visual arts are also more likely to be animation fans than most others.

As for live action shows, it takes a certain level of artistic sophistication to depict real people with any degree of recognition. That doesn't stop anyone, however, and any visually interesting or unique show is likely to have some fan-made pieces floating around. Most often these are Speculative Fiction shows, since most fan art based on normal people is more about the actor or actress than the character. Then again, an entire Yahoo! Group is dedicated to celebrity likenesses made with the Poser and FaceGen applications.

In Japan, Fan Art in manga form, from either anime or other manga, are called Doujinshi. Technically, doujinshi can refer to all independently published manga, but to American anime fans it usually means a fan-made parody or erotica based on an existing work.

Many Web Comics (particularly ones with recurring characters and good quality artwork) have dedicated fan art galleries on their websites, with images ranging from single characters to full-blown guest strips that don't fit in the archive.

Examples of Fan Art include:
Retrieved from "https://allthetropes.org/w/index.php?title=Fan_Art&oldid=1634756"
Categories: