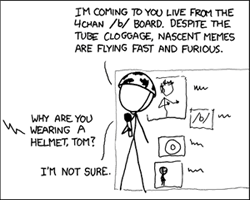 "That helmet won't save him."

Online forums that exist expressly for the purpose of posting images and/or disscussions. They usually have a variety of sub-boards, each with its own focus. Unlike most forums, threads are never archived by the site, so if nobody posts in one for a while, it will eventually be deleted.

The imageboard as it's usually thought of today began in Japan. Futaba Channel, a spin-off of the popular text-based discussion board Ni-Channel (2ch) is probably the best-known. Sometimes the blanket term 'wakaba style' board is used (wakaba referring to the board software that runs the board), traditionally allowing anonymous posting with a self-enforcing theme and standard that hopefully keeps it from becoming too mediocre.

The best-known in the US is probably 4chan, created in 2003 to serve as an English-language version of Futaba Channel. Especially among American Otaku, it's quite popular for the generator of memes and, due to anonymous users and loose moderation, extremely variable quality; for these reasons, one could see imageboards to be the antithesis of social networking sites such as Twitter and Facebook.

The only real standing rules of just about every imageboard site in existence (besides specific topic rules for subforums) is that its users can't post anything considered illegal in a site's area of hosting (many admins turn a blind eye to things like unauthorized filesharing, however). Dodgy to outright highly illegal material is occasionally posted anyway just for the pleasure of subverting this rule; mods unsurprisingly counter this with anything from warnings to reports to the FBI.

What many imageboard sites have in common is using the same distinctive layout and interface from 2ch: there is a sidebar either on the left, bottom, or top (but never the right) that lists each board on the site in a simple URL theme (usually a contraction of their topic name), and to the right of this is the actual site content. Most boards are also set up fairly similarly to 2ch, (/v/, /m/, /tg/, etc) so you can usually count on wholly different sites to have the same general setup.

Not to be confused with our own Image Links category.

Notable Imageboards (every link below should be considered NSFW unless specifically mentioned otherwise):
Retrieved from "https://allthetropes.org/w/index.php?title=Image_Boards&oldid=1954403"
Categories:
Cookies help us deliver our services. By using our services, you agree to our use of cookies.