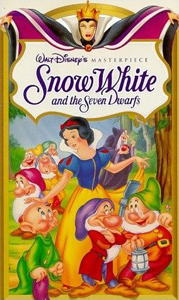 Walt Disney made Snow White and The Seven Dwarfs into an animated movie in 1937, the first full-length animated feature film in the English-speaking world and the first entry in the Disney Animated Canon. Using a number of new technologies and animation techniques, the film set high standards for future projects and can be considered a defining moment in animation history. Disney adapted the Grimms' story fairly closely, but allowed Snow White and her prince to meet earlier in the story (removing some of the Squick), and made the dwarfs into individual characters. He condensed the three assassination attempts into one, and gave the queen a much more family-friendly Disney Villain Death (though, all things considered, it's arguably more violent than the original one.)

Part of the reason Snow White was made was for the purpose of economics -- despite the ambitious art and extreme popularity of the Mickey Mouse and Silly Symphonies shorts, Walt came to realize that no matter how successful his shorts were, the profit came solely from the length of the shorts, not popularity. Realizing that venturing out into making a feature length animated film could not only net him more profit in the long run, but also progress the medium of animation as an art-form, he began work on his daring project. Around four years were spent by Disney trying to get this mammoth project off the ground: First, there was the obsessive attention to story -- Walt had the savvy to realize that a feature that played out like a traditional short cartoon comedy would never work, resulting in focus on the characters' personalities, their interactions, as well as their development in the context of the tale. The most prominent example of this character development would be the character of Grumpy, arguably the most important character in the film aside from Snow White herself.

Another obstacle was getting the animation to be on par with a live-action film -- even the best Silly Symphonies and Mickey Mouse cartoons during the early 1930s were still rigid and crude in their motion. As a result, life-drawing classes and frame-by-frame studying of live-action film took place, in an ambitious attempt to get the most life-like animation possible. The Silly Symphonies began to be used as testing grounds for the work that would go into Snow White -- from advancements in story and character animation, to major special effects discoveries. The studio also had to expand considerably to complete the film -- from a measly few hundred to nearly 1000 staffers by the film's completion. At one point, Walt almost ran out of money during production, and was lucky enough to receive a bank loan by showing what footage had already been finished. During production, the film was derided by critics, as well as Walt's own wife, as "Disney's Folly", the notion that Walt had gone over his head with this project. But upon debut, Snow White was a smash hit -- at the time, it was the highest grossing film of all time, and was universally praised by critics, setting the stage for the future Disney films to come, and proving that animation could compete with live-action films.

As for the plot, we're not even going to bother summarizing it, since everybody knows about this film and its story by now.

Filmation made an unofficial sequel called Happily Ever After. Unsurprisingly, Disney took offence and sued Filmation, only for them to reach a settlement.

Also, you just know Disney did something right when a man like Adolf Hitler of all people considered this the greatest film ever made, to the point where he even acquired a personal copy of the film's print for himself, and possibly drew fan art for it.

The Snow White character herself was eventually used as a "Princess of Heart" in the Kingdom Hearts series, in which she is one of seven Princesses to have a pure heart, without an inkling of darkness inside them. Her world was shown in the 2010 game Kingdom Hearts: Birth By Sleep as "Dwarf Woodlands". Some changes to the story have been made for the three protagonists, such as Terra taking the place of the Assassin, but mostly follows the story.

A version of Snow White appears as one of the principal characters of the ABC Urban Fantasy series Once Upon a Time, both as her fairytale self and as her alter ego Mary Margaret Blanchard.

Snow White also appears as an "Oh My Disney" cast member in the 2018 animated film Ralph Breaks the Internet alongside the other Disney Princesses.

Tropes used in Snow White and the Seven Dwarfs (Disney film) include:
Retrieved from "https://allthetropes.org/w/index.php?title=Snow_White_and_the_Seven_Dwarfs_(Disney_film)&oldid=1948574"
Categories:
Cookies help us deliver our services. By using our services, you agree to our use of cookies.