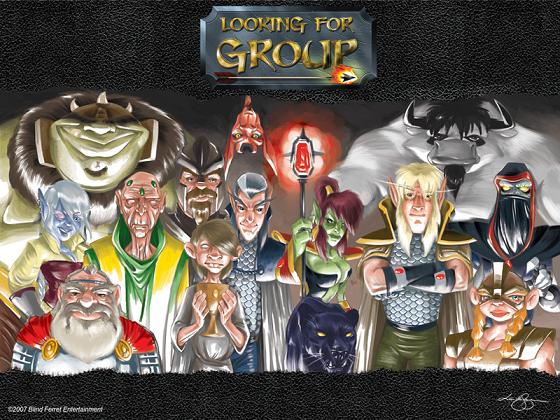 Looking For Group is a fantasy Web Comic by Ryan Sohmer and Lar DeSouza, the creative team behind Least I Could Do and the Blind Ferret Entertainment animation studio. It borrows from classic D&D conventions and World of Warcraft to tell an original story.

The main character is Cale'Anon Vatay, an elf who yearns to be a just and good hero. Unfortunately, in the LFG world, elves are Exclusively Evil. However, this is something that Cale is not aware of until told to go forth and do heroic stuff by his monastery, after which he meets an undead warlock named Richard, who is the embodiment of pure Chaotic Evil. Seemingly out of boredom, Richard decides not to kill Cale outright but to accompany the elf and watch him anguish over his existence and antagonize him whenever possible.

Shortly after meeting Richard, Cale was killed (guess who did that) and Richard helped him seek out a priest to resurrect him. Enter Benn'Joon, an unknown race priestess who, while more pragmatic than evil, has about as few qualms as Richard. She agrees to raise Cale for help with her pursuers in the King's Legion (who are also evil). Benny's adoptive father, a minotaur scholar named Krunch, also joins with them.

Then they set on their quest: Cale to restore goodness and honor to his race, Benny to pay off her debt to the legion, Krunch to learn the secrets of the ancients that can help with both their goals, and Richard... well, he just likes to kill things, and following these guys around seems to afford him plenty of opportunities for a little carnage.

As the group progresses, the story arc continues to get more detailed. Suffice to say, it is too interesting and vivid to be revealed here. Read it and enjoy!

This webcomic is being made into a feature film by Blind Ferret that is due out soon, according to Sohmer. The trailer is available here (well worth a watch). Truth be told, it's long overdue. The description of the trailer pegs the release somewhere in 2008. However, judging by this, it appears there have been problems on the set. And Richard's lost his fork.

Tropes used in Looking for Group include:
Retrieved from "https://allthetropes.org/w/index.php?title=Looking_for_Group&oldid=1797304"
Categories:
Cookies help us deliver our services. By using our services, you agree to our use of cookies.