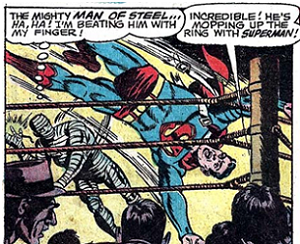 This guy must be tough; he's beating up Superman!

Want a quick way to show how dangerous one of your unknown characters is? Simple, make him win a fight or score points against a character that the audience already knows is tough. This establishes him as willing to fight and marks him as sufficiently dangerous.

For new villains, it's common for them to pick up the toughest character among the heroes and hurl him across the room or otherwise take him out in one blow, thus showing that they are the real deal. "Wow, he just beat up Worf! He must be bad news!" Of course, if the same character is repeatedly used as the target of displays like these, it can result in Badass Decay, and if abused, his toughness could become an Informed Ability.

Worf Had the Flu is sometimes used to justify Worf's poor showing. A Worf Barrage is when an "ultimate" attack or technique is defeated this way instead of a character. If a new villain introduces himself by beating the previous villain, that's Make Way for the New Villains (a Sub-Trope). When Worf gets beaten emotionally rather than physically, that's Break the Badass.

Compare Badass in Distress and The World's Expert on Getting Killed, both of which can overlap. Killing off a Red Shirt or two is a slightly different method for achieving a similar effect. If the character beats up a whole army's worth of Worfs, Conservation of Ninjutsu is probably at work. Contrast Fight Dracula, in which a writer has a pre-established character (as opposed to a new one) demonstrate their awesomeness by fighting Dracula (but not necessarily winning).

Named for the tendency in Star Trek: The Next Generation and Star Trek: Deep Space Nine for hostile creatures to do that very thing to Worf. No relation to the Whorf effect.

Examples of The Worf Effect include:

Retrieved from "https://allthetropes.org/w/index.php?title=The_Worf_Effect&oldid=1934408"
Categories:
Cookies help us deliver our services. By using our services, you agree to our use of cookies.