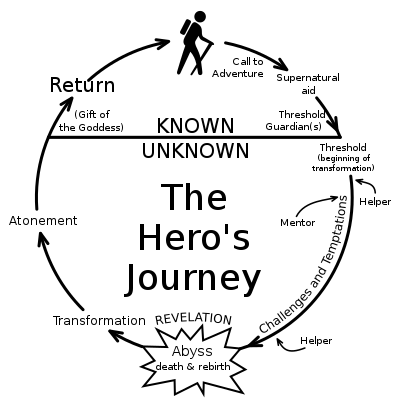 The concept of the Hero's Journey was described by mythologist Joseph Campbell in his book The Hero with a Thousand Faces and refined by Christopher Vogler in his book The Writer's Journey.

It can be boiled down to three stages:

More elaborate taxonomies usually include the following stages, not all of which need be present:

Use of the Hero's Journey in fiction

The Harry Potter books can also be seen to be cyclic in this fashion, although the journey was followed more closely in the earlier installments. The sixth and seventh books are arguably one cycle divided into two parts. With the final book having been split into two films, the last three films kind of form their own mini-trilogy, with each installment covering a step in the departure-initiation-return model. An interesting element is the fact that in the first five books/films, the Muggle world is the ordinary world and Hogwarts is the world of adventure, but in the Prince/Hallows duology/trilogy, Hogwarts has become the ordinary world and now it is the world beyond Hogwarts which is the world of adventure.

Compare Campbell's description of the journey with Booker's The Seven Basic Plots, especially the plots of Overcoming the Monster, The Quest, and Voyage and Return. Like Campbell, Booker invests a lot of symbolism in the various elements, to the point where messing up the symbolism kills the story for him (for example, he calls Star Wars flawed because they rescued the princess way before they killed the Big Bad, when ideally those should happen at the same time, since the death of the Monster causes the release of the Anima).

No examples, please; we could potentially list every story in human history.

Flaws of the Hero's Journey, or why you might want to avoid using this narrative structure

As pointed out here, the Hero's Journey is about the Hero - it leaves no room for contrasting points of view or the meaningful involvement of a deuteragonist in the story. Thus, it is a poor choice for a narrative structure in any cooperative work (such as a tabletop RPG), or for a story that seeks to depict more than a single point of view.

Compare The Quest. See also Propp's Functions of Folktales. If you experience a Heel Realization mid-Journey and realize your efforts so far have been for the wrong side or wrong reasons, please take the detour to your Redemption Quest.

Retrieved from "https://allthetropes.org/w/index.php?title=Hero%27s_Journey&oldid=1873881"
Categories:
Cookies help us deliver our services. By using our services, you agree to our use of cookies.