Jumped At the Call 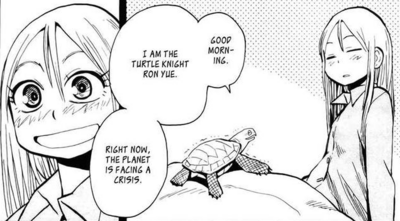 For some heroes, when they receive the Call to Adventure, they refuse the call. When they finally accept the call, they continue to complain that "I Just Want to Be Normal".

Heroes who Jumped At the Call wonder what's wrong with those people.

These heroes are excited when adventure comes calling. They never, ever, ever say "I Just Want to Be Normal". They already have a costume, already picked out a codename, and they have been practicing how to deliver a Pre-Ass-Kicking One-Liner. They're already swallowing the red pill before you can even offer them the blue. About the worst thing you could do to them is to bring them down to normal. Or tell them someone else Missed the Call. They don't even care that more experienced people are reluctant; Least Is First.

Often, had a Changeling Fantasy once upon a time, and generally has Otaku tendencies. He is truly living the dream. Such a hero is also the most likely to be The Unchosen One, the Chosen hero that chooses himself.

However, you can also be too eager to jump, and end up jumping off a cliff. Beware shady strangers offering you everything you want. Genre Savvy bad guys, especially the Big D, will try to get you to miss the real call by jumping at theirs instead. They also sometimes tend to forget the baggage that comes with answering with the call, namely the fact that The Call Knows Where You Live.

When a hero is given a chance at returning to heroism and jumps at it, he is usually in love with being In Harm's Way. Neophytes might think themselves in love with it, and may actually turn out to be, but they may also discover, after real adventures, that they do not love it after all.

If a hero loses whatever power or abilities that made them a hero, and forces themselves into The Call again, one could say they've Got the Call on Speed Dial. A variant path through Hero's Journey.

Examples of Jumped At the Call include:

Retrieved from "https://allthetropes.org/w/index.php?title=Jumped_At_the_Call&oldid=1947957"
Categories:
Cookies help us deliver our services. By using our services, you agree to our use of cookies.