Everything About Fiction You Never Wanted to Know.
(Redirected from Muggle)
Jump to navigation Jump to search 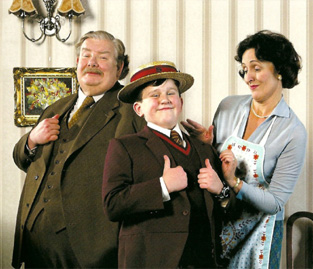 Why shouldn't they be happy? They're just like All of the Other Reindeer.

Ordinary People. Those who are not special, like the favored of the plot. Mundane folk who are only aware of their own small section of reality. The source from which most characters spring.

They're the "normal" for those who crave it and those who would hate it if it happened. Ironically, Muggles often treat these extraordinary people like crap, because Muggles are All of the Other Reindeer — although sometimes this happens the other way around, more cynical super-people looking down on them as Innocent Bystanders — a pathetically bland, underdeveloped species.

The Secret Identity pretends to be this.

They are the ones who the Masquerade is used to hide from. Who nobody (not even the heroes) mind if they get their memories wiped of supernatural events. Sometimes reality itself conspires to hide the plot from their minds, in ways like Somebody Else's Problem, Weirdness Censor, and Invisible to Normals. Then again, they may just not want to know because Apathy Killed the Cat.

It's often convenient to remove them from the picture if their kids are the heroes.

A few of them might actually have been Born Of Mages. In fact, those might be the only kind.

Those Two Guys are friendly Muggles. The Badass Normal is physically one, but their temperament and experiences set them apart. The Unfazed Everyman is functionally a muggle, but as a central character and audience surrogate has the distinction of witnessing all sorts of crazy action firsthand. Muggle Foster Parents are... well, they are what it says on the can.

Muggles are to be protected, avoided, manipulated, or abused by the characters or the plot—often all four, one way or another.

Expect the Red Shirts to be muggles since non-muggles are usually too plot-valuable to waste. Even muggles with characterization need to watch it: they could be Mauve Shirts. More rarely, Muggles Do It Better comes in to play: mundane people with mundane technology have a real fighting chance in works featuring this trope (often the reason why the Masquerade exists, otherwise the supernatural would get its butt handed over by Badass Normal hunters).

Examples of Muggles include:

Retrieved from "https://allthetropes.org/w/index.php?title=Muggles&oldid=1808365"
Categories:
Cookies help us deliver our services. By using our services, you agree to our use of cookies.