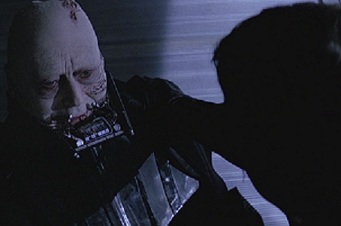 "Tell your sister...you were right."

Sometimes, bargaining for salvation will get you a lethal dose.

If a character has done something horrible, unforgivable, or disastrously stupid, and in the course of fighting to undo the damage is redeemed or rights their situation, then they will die. Badly.

This is, of course, for the benefit of the audience. Sure, a redemption story is good and dramatic and all, but if the redeemed villain went off to a happy little life with Babies Ever After, it might still offend our moral sensibilities, since it means he may never pay for those terrible things he did before.

Distinct from Heroic Sacrifice because the character does something redeeming, and then dies later - not doing the heroic thing.

This happens in the worst kinds of Conspiracy Redemption stories.

Don't expect characters who die for this reason to come back.

Contrast Death Seeker, for whom the death is the redemption. Similarly, contrast Villain's Dying Grace for when a dying villain chooses to do a final good act, Death Equals Redemption when the realization he is dying triggers the change of heart, Redemption Quest and Alas, Poor Villain when the character's death (speech) provides a reason for the fans to feel sorry for them. Opposite of Redemption Earns Life. See also Deadly Change-of-Heart, when the poor guy doesn't even get to redeem himself before dying. Nearly every non-protagonist Atoner will end with this one. These characters always manage to win More Hero Than Thou argument. Contrast Treachery Cover-Up; while characters may cover up this character's wrong-doing, it will be because he redeemed himself. Sometimes makes you think Being Good Sucks.

Examples of Redemption Equals Death include:

Retrieved from "https://allthetropes.org/w/index.php?title=Redemption_Equals_Death&oldid=1871047"
Categories:
Cookies help us deliver our services. By using our services, you agree to our use of cookies.