Everything About Fiction You Never Wanted to Know.
Jump to navigation Jump to search
/wiki/Leonard Nimoycreator 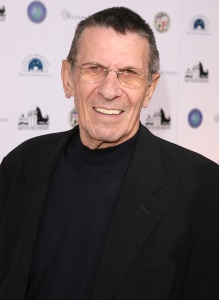 Leonard Nimoy (1931-2015) was an actor best known for playing Spock on Star Trek: The Original Series. He was so much remembered for this role, and little else, that he went on to write an autobiography called I Am Not Spock, a reference to the fact that he didn't like being typecast and taken less seriously as an actor. The title led to a lot of confusion by fans, who assumed he resented Spock as a role, obliging him to write a second book entitled I Am Spock.

Beginning with Star Trek III: The Search For Spock, he started up a low key directing career that included Star Trek IV: The Voyage Home and Three Men And A Baby. As well, his distinctive voice has lead to several roles in animation and video games.

He also recorded several albums in the late 1960s. Surprisingly, he wasn't as bad as you would think -- or at least, not as campy as Shatner. Your Mileage May Vary: Nimoy appeared on many of the Golden Throats collections issued by Rhino. The earlier albums are especially great for a laugh, especially when he actually was portraying Spock.

Since the mid-'90s, he went into semi-retirement, only taking on the occasional role that really interested him. He eventually retired from on-screen acting completely after a stint as The Ghost William Bell in Fringe, and basically said "If you want to talk about Spock from now on, speak to my replacement." He would still do voice acting roles, including the voice of Sentinel Prime in Transformers: Dark of the Moon. Otherwise, he enjoyed a hobby in photography.

As well-documented by both himself and William Shatner, the two of them and DeForest Kelley shared almost the same relationships offscreen as they did as their most famous characters (albeit with a much more mellow friendship with De, due to him being much less grumpy than McCoy). When Nimoy's father died during Star Trek's original run, Shatner was the only member of the cast who bothered to turn up and provide emotional support, a gesture that Nimoy remembered fondly for the rest of his life.

Sadly, Mr. Nimoy was taken from us at the age of 83, when he passed away due to end-stage chronic obstructive pulmonary disease. He is survived by his wife, Susan Bay Nimoy. He will be dearly missed.

Leonard Nimoy provides examples of the following tropes:
Retrieved from "https://allthetropes.org/w/index.php?title=Leonard_Nimoy&oldid=1655348"
Categories:
Cookies help us deliver our services. By using our services, you agree to our use of cookies.