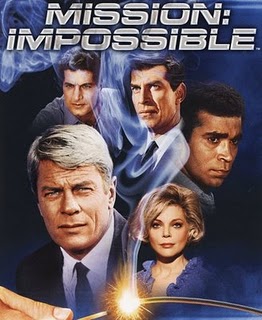 The show you're looking at is Mission: Impossible, a unique Spy Drama based around a semi-ad hoc covert operations team employed by the US Government for dicey missions needing maximum deniability. The television series lasted from September, 1966 to March, 1973; a total of 171 episodes were filmed over the seven season run. It was the longest-surviving of the "spy-fi" genre of US and UK-made TV series of the 1960s (The Avengers aired over a 9-year period but fewer seasons and episodes were produced).

With a few rare exceptions every episode followed the same outline: First, a prerecorded briefing informs the team leader, Jim Phelps, of the target, what needs to be done to him, and why. Second, Jim assembles his team and the viewer gets to see a selected but mostly uninformative subset of their planning and briefing. Thirdly, the mission -- usually a caper or con -- is executed, sometimes with real or bogus crises along the way. Finally, the team reassembles in a convenient panel truck and drives off as the target confesses, turns state's evidence, or slowly cools in a spreading pool of blood.

Martin Landau played Rollin Hand, a Master of Disguise, sleight-of-hand, card sharping and many other skills, as a guest star in the pilot, but was so popular with audiences that he became the Ensemble Darkhorse and was called back for virtually every subsequent episode, always billed as a "special guest star". He was made a series regular in Season Two.

When Hill became increasingly difficult to work with[1], he was gradually written out of the series; when he was replaced by Peter Graves as Jim Phelps in Season Two, the classic cast was set. Other cast changes followed; with Landau and Bain leaving at the end of Season Three, Landau replaced by Leonard Nimoy, fresh from the recently cancelled Star Trek: The Original Series (which Landau turned down to do MI instead), and Bain by an assortment of leading ladies, culminating in Lesley Warren as the waif-like Dana. An ill-advised attempt at writing out Peter Lupus in favor of a medical doctor team member played by a pre-cowboy-stardom Sam Elliott, until the producers realized how popular Willy was. An attempt was eventually made to invigorate the leading lady role by casting Lynda Day George as Casey, who was both the leading lady and the Master of Disguise, but by then the series was on its last legs. One final cast tweak in the final season saw George temporarily replaced by Ironside veteran Barbara Anderson while George was on maternity leave.

|Mission Impossible was a thinking man's espionage program. Gunplay was kept to a minimum (with a few notable early-series exceptions when the series was still finding its rhythm), and the focus was always on outwitting and outmaneuvering the foe, who usually didn't know he was being targeted at all. The IMF were never dispatched for ordinary tasks that a simple James Bond type could handle with a couple of explosions and a chase scene - they were called upon to accomplish their goals by out-planning and out-thinking their opposition, often by playing mind games with them on such a scale that more than one may have been driven into madness. After the first season, IMF operatives rarely killed anybody directly, but their targets didn't always survive as a favored outcome was usually the target being killed by his own organization.

All but invented Latex Perfection and the Master of Disguise, and originated many of its own unique tropes, not the least of which is its most famous and most parodied elements, "this tape will self-destruct in five seconds" and "if you or any member of your MI Force are caught or killed, the Secretary will disavow all knowledge of your actions." Interestingly, early seasons only used the self-destructing tape on occasion, with other methods such as melting vinyl records and hidden recordings being used more frequently. A growing number of episodes as the series went on omitted the tape scenes altogether, sometimes featuring missions joined in progress, or "personal missions" where an IMF member goes off-book.

The show's distinctive use of what creator Bruce Geller called "a team of specialists" to carry out a complex plan inspired numerous imitators, most notably The A-Team, but also shows such as Charlie's Angels. None did it as well, though.

There was a two-season Next Generation-style continuation of the original series filmed in Australia in the 1980s; Peter Graves returned as Jim Phelps, mentoring an all-new team (including Barney Collier's son); originally conceived as a straight-out remake in order to fill a hole in ABC's schedule created by a Hollywood writer's strike, the series ended up being a continuation of the original. An NES game was also developed. But a more successful revival occurred with a |Mission Impossible film series starring Tom Cruise, although it bears little resemblance to the tone and spirit of the original series. A TV series based on the movies is possibly being developed.

Your mission, Troper, should you choose to accept it, is to describe the tropes found in the series:
Retrieved from "https://allthetropes.org/w/index.php?title=Mission:_Impossible_(TV_series)&oldid=1503279"
Categories:
Cookies help us deliver our services. By using our services, you agree to our use of cookies.