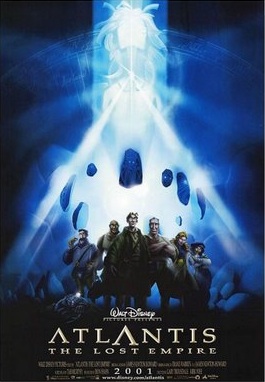 Entry #41 in the Disney Animated Canon, Atlantis: The Lost Empire begins with a great cataclysm that occurred in the distant past.

Flash forward to the early 20th century. Milo Thatch, a young, poor, orphaned linguist, has uncovered evidence of the existence of a great civilization in the past, Atlantis, which was previously thought to be just a myth. Despite his breakthroughs in deciphering clues hidden in the writings and legends of many disparate cultures his ideas are rejected by peers and his proposed expedition, to find "the Shepherd's Journal" and follow its instructions to the lost city itself, is rejected out of hand. However, a mysterious woman steps in and offers him a chance to prove his theory, backed by the mysterious billionaire Mr. Whitmore, who knew Milo's grandfather and had agreed years earlier to help finance Milo's expedition.

Once Milo meets Whitmore and convinces him of his own personal determination and commitment he is invited to join an expedition that is setting out to make the unprecedented trip to Atlantis itself. The rag-tag team is led by Commander Rourke, a straight, no-nonsense military man, who also knew Milo's grandfather and worked with him on the previous expedition where they found the Shepherd's Journal. Once they arrive at the destination from which they might never return, they discover an underdeveloped, dying society that has abandoned and forgotten their written language -- and Milo becomes a translator between the two cultures. However, it is revealed that there is an ulterior purpose to the expedition that Milo is unaware of, and his compatriots are not all that they seem.

While Atlantis is technically in the Disney canon, it does not appear much in modern promotionals, probably because the movie did not do too well in the theater, adding to the growing fear that 2D animated movies were dead (though Disney's other 2D animated movie did better for the year). It was otherwise notable for being accused of ripping off set pieces similar to those in Nadia: The Secret of Blue Water (an unrelated anime series also about Atlantean mythology) and Stargate. (Stargate Atlantis, however, is unrelated.) See also Indiana Jones and the Fate of Atlantis, a cinematic game which was mooted as the basis for an Indy 4 that never was. The movie itself was based on Twenty Thousand Leagues Under the Sea by Jules Verne, as was Nadia, which goes some way in explaining similar themes. For what it is worth, one of the credited writers is Joss Whedon, and Mike Mignola was the production designer.

While it was both a critical and financial failure, the film is fairly popular for being vastly different than standard Disney fare - it's similar to The Black Cauldron in this regard, although it gains some credit for not nearly being a Franchise Killer for the Disney Animated Canon.

Atlantis is also the second Disney Animated Canon film to be rated PG, with the first being The Black Cauldron, which was released all the way back in 1985!

Tropes used in Atlantis: The Lost Empire include:
Retrieved from "https://allthetropes.org/w/index.php?title=Atlantis:_The_Lost_Empire&oldid=1833634"
Categories: