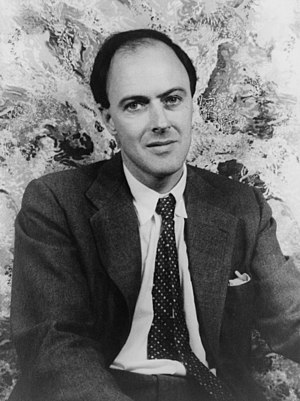 Roald Dahl (13 September 1916 – 23 November 1990) is a Norwegian-British author who has become famous for his distinctively dark children's novels. His style is very Black Comedy, and as a result the stories contain a good deal of more-than-usually sophisticated Nightmare Fuel. The fact that his target audience has been happily lapping all this up for decades now seems to imply that many kids actually like to be terrified (hey, it works for Doctor Who).

Put bluntly, Dahl seems to have used writing for children as an acceptable means to beat on all that he hated and feared in his fellow man. And on the evidence as presented, gosh there was a lot. The majority of his works in the genre feature adult villains menacing innocent young children (or, in a couple of memorable cases, fuzzy little animals) more or less just because they can. Sometimes these are traditional boogeymen (e.g., The Grand High Witch in The Witches, the Giants in The BFG) but more often they're simply irredeemably vile and/or stupid grownups. Just how irredeemable is spelled out in exquisite detail on almost every page.

Come to think of it, this may explain quite a bit about his appeal among, well, innocent young children. Quite a few not-so-innocent ones, too.

All of this would also be following Beauty Equals Goodness pretty closely if most of his small heroes and heroines weren't themselves deliberately very average-looking. They're also in large part Aesop-proof—being already the shining heroes of the piece simply by first recognizing and then refusing to give into the nastiness around them. They succeed in foiling the bad guys by virtue of their already-innate goodness, intelligence, and/or resourcefulness. If you're starting to suspect that there were very few grey areas in Dahl's POV, you're right.

Traditionally, his books are illustrated by Quentin Blake, master of loopy sketchiness. Almost all of his juvenile books have been made into movies—the iconic Charlie and the Chocolate Factory more than once—and, curiously, no two of these movies were made by the same people (though Henry Selick almost broke this trend; after making James and the Giant Peach, he was slated to direct Fantastic Mr. Fox, but left to work on Coraline instead).

He was born on September 13, and wrote two autobiographies: "Boy: Tales of Childhood" (exactly what it says on the tin) and "Going Solo," about his time serving in WWII. As with any monument of children's entertainment, his personal life is the subject of much debate. Not only was he a prolific author, he was also a fighter ace and a spy. He was also known for being an utterly shameless womaniser. He was married for many years to Oscar-winning actress Patricia Neal. When she tragically suffered burst cerebral aneurysms the diagnosis was that she would never walk or talk again. Dahl wouldn't hear of this, and personally took control of her rehabilitation. Over the next few years he—for want of a better word—bullied her back to health.

Most controversially (and the obvious reason why he never received a knighthood or other official UK honours) he was also quite the anti-Semite:

Works written by Roald Dahl include:

...but he has written many, many, many more, perhaps most notably Going Solo, a non-fiction book about his experiences as an RAF fighter pilot in WWII (Oh, and he wrote the screenplay to You Only Live Twice and Chitty Chitty Bang Bang, too, both adaptations of books by his good friend Ian Fleming).

He also wrote various collections of fiction for adults, most of which had a lot of similarly black humour, and most of which was quite disturbing. Let's just say, before he was known as a master of children's stories, he was known as "The Master of the Macabre", and it shows. A lot. Many of these stories have been adapted into Tales of the Unexpected.

Retrieved from "https://allthetropes.org/w/index.php?title=Roald_Dahl&oldid=1900877"
Categories:
Cookies help us deliver our services. By using our services, you agree to our use of cookies.