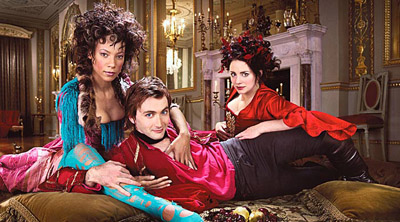 Check out his "Companions".

The sexual predator — a character who relentlessly pursues, lands, loves and then abandons members of the opposite sex. Sometimes comic, sometimes a monster, always successful this character leaves behind a string of broken hearts and (occasional) vows of Revenge. Casanova's only motivation is indulging his Lust and desire, sating them with the bodies of his conquests.

Contrast with the unsuccessful Casanova Wannabe. Compare with the inexplicable Kavorka Man. A guy who gets the girls like a Casanova, but unintentionally, is a Chick Magnet. If kind-hearted, may overlap with Chivalrous Pervert. The Charmer is equally charming but less sex-obsessed. If they really get around but want to settle down it's Looking for Love In All the Wrong Places. A Handsome Lech has more negative connotations and a sparser scorecard than the Cassanova.

The trope is named for Giacomo Girolamo Casanova (1725-1798), a soldier, spy, diplomat and adventurer whose extensive but unreliable autobiography established his eternal fame as a lover. It should be noted that the historical Casanova was closer to a Chivalrous Pervert who really was looking for love... just with women who were locked in loveless political marriages - and also gained his successes famously ugly. (Definitely he was no Heath Ledger.) Interesting and prone to be noted for his modern wannabes, he was one of the few 18th century men who bathed almost daily and asked the same thing from his partners.

Many films, TV movies and TV mini-series are named for and based on that person. The best known are Fellini's 1976 film, the 2005 film starring Heath Ledger, and the 2005 BBC drama mini-series starring David Tennant. The latter is considered one of the more faithful adaptations of Casanova's memoirs, while Fellini's... wasn't.

For the juvenile version—all of the above without the sex—see Kidanova. Contrast the Serial Romeo. If the guy is actually only rumored to be a Casanova and has no evidence onscreen, it's the Urban Legend Love Life. If he develops feelings for one of his conquests (or someone who refuses him), he's a Ladykiller in Love. See More Friends, More Benefits for when the mechanics of a game encourage the player character to act this way.

Note: It should be mentioned that even after the affairs were over, most of Casanova's ex-lovers still liked him. This trope would probably fit (the fictional) Don Juan better.

Examples of The Casanova include:

Retrieved from "https://allthetropes.org/w/index.php?title=The_Casanova&oldid=1890983"
Categories:
Cookies help us deliver our services. By using our services, you agree to our use of cookies.