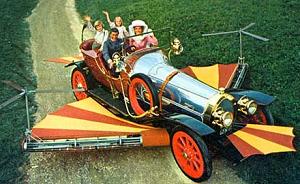 Having noted the success of Disney's Mary Poppins, its 1964 Edwardian Era Musical, Metro Goldwyn Mayer sought three years later to re-establish its position as the leading purveyor of musical films by hiring The Sherman Brothers, the same song-writing team that had scored Poppins, to adapt another period piece into a big-budget musical extravaganza. The result was Chitty Chitty Bang Bang.

Caractacus Potts (an English inventor with an American accent played by Dick Van Dyke) rebuilds an old wreck of a race-car and makes a few slight improvements, such as giving it the ability to sail and to fly. With his kids, grandfather and the beautiful daughter of a candy mogul, Caractacus travels to the distant, vaguely mitteleuropäisch land of Vulgaria (location shooting for the film version was done around the Bavarian castle of Neuschwanstein and in the medieval town of Rothenburg-ob-der-Tauber), where they get in trouble with the country's Evil Aristocrat leaders who hate children, but like their car (hey, it's better than a Lada). Naturally, they steal both.

The book it's based on was written by Ian Fleming. Yes, that Ian Fleming. The movie itself was directed by Albert Broccoli of the same fame. Gert Fröbe, who played the Baron, also played Auric Goldfinger. Benny Hill was the Toymaker. Oh, and the screenwriter was Roald Dahl. Seriously, you can't make this stuff up.

Tropes used in Chitty Chitty Bang Bang include:
Retrieved from "https://allthetropes.org/w/index.php?title=Chitty_Chitty_Bang_Bang&oldid=1882972"
Categories:
Cookies help us deliver our services. By using our services, you agree to our use of cookies.