Everything About Fiction You Never Wanted to Know.
Jump to navigation Jump to search
/wiki/Robert Downey, Jr.creator 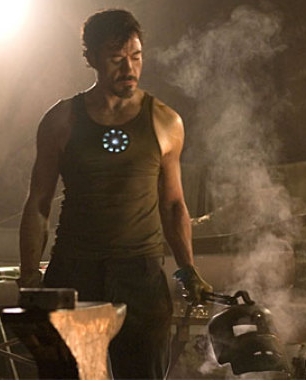 And he did all that in a cave! WITH A BOX OF SCRAPS!

Robert John Downey, Jr. is an American actor, film producer and musician. Downey made his screen debut at the age of 5 when he appeared in one of his father's films, Pound (1970), and has worked consistently in film and television ever since.

During the 1980s, he was a cast member on the NBC sketch show Saturday Night Live (his uncle, Jim Downey, was a cast member on the show in the 1979-1980 season and is currently on the show as a writer) and had roles in a series of coming-of-age films associated with the Brat Pack. He was cast to read one of the letters in the 1987 film "Dear America: Letters Home from Vietnam" before his rise to fame. Less Than Zero is particularly notable, not only because it was the first time Downey's acting would be acknowledged by critics, but also because the role pushed Downey's already-existing drug habit one step further. After Zero, Downey started landing roles in bigger films, such as Air America and Soap Dish. These higher-profile roles eventually led to his being cast as Charlie Chaplin in the 1992 Biopic Chaplin, for which he gained an Academy Award nomination for Best Actor.

Between 1996 and 2001, Downey was frequently arrested on drug-related charges and went through several drug treatment programs, but had difficulty staying sober. After being released from the California Substance Abuse Treatment Facility and State Prison in 2000, Downey joined the cast of the hit television series Ally McBeal, playing the new Love Interest of Calista Flockhart's title character. His performance was praised and he was nominated for an Emmy award in the Outstanding Supporting Actor in a Comedy Series category and won a Golden Globe for Best Supporting Actor in a mini-series or TV film, but his character was written out when Downey was fired after two arrests in late 2000 and early 2001.

After one last stay in a court-ordered drug treatment program, Downey finally achieved lasting sobriety and his career began to take off again. He appeared in semi-independent films such as The Singing Detective, A Scanner Darkly, and Kiss Kiss Bang Bang. He also had supporting roles in the mainstream films Gothika and Zodiac. In 2004, Downey released his debut studio album The Futurist, although he was involved with music a little earlier; that's him walking around in the Elton John video for "I Want Love."

In 2008, Downey became the title character in the Comic Book adaptation Iron Man. Somehow, playing a Superhero with undeniable talent and a substance abuse problem seemed to be a natural for him. His other 2008 films include Charlie Bartlett and Tropic Thunder, directed by Ben Stiller, in which he played Australian method actor Kirk Lazarus, who is overly engrossed in his role as an African-American soldier. He received his second Oscar nomination for said film, in the category of Best Supporting Actor, which he lost to Heath Ledger (but not before being lauded by Jamie Foxx as the only man crazy enough and good enough to play blackface).

He next played the lead character in Guy Ritchie's adaptation of Sherlock Holmes, which opened on Christmas 2009. It is a very different, but surprisingly faithful to the original books, take on the character and it was a hit and a Golden Globe winning role for Downey.

In 2010, Downey appeared in Iron Man 2, another huge hit, and the comedy Road Movie Due Date along with Zach Galifianakis. He reprised the role of Sherlock Holmes in 2011's Sherlock Holmes: A Game of Shadows. In 2012, he appeared as Iron Man in the highly successful The Avengers.

He is set to appear in Avengers: Infinity War and an upcoming Pinocchio film.

Oh, and he's the voice for Mr. Peanut.

Robert Downey, Jr. provides examples of the following tropes:
Retrieved from "https://allthetropes.org/w/index.php?title=Robert_Downey,_Jr.&oldid=1524974"
Categories:
Cookies help us deliver our services. By using our services, you agree to our use of cookies.