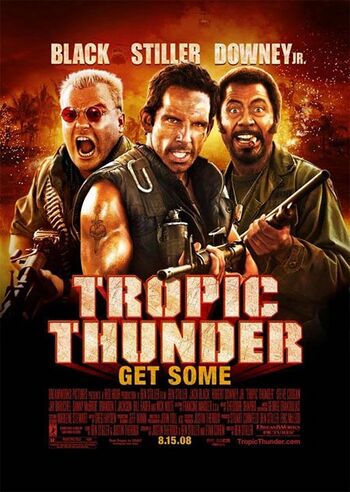 Of the ten men sent, four returned.
Of those four, three wrote books about what happened.
Of those three books, two got published.
Of those two, just one got a movie deal.

This is the story of the people who attempted to make that movie.

Tropic Thunder is a satirical American action comedy film (with more focus on the comedy) from 2008, based (very loosely) on the train wreck that was the production of the classic Apocalypse Now.

Movie producer Les Grossman (Tom Cruise) is in need of an award-winning movie and decides to make the best and most expensive Vietnam War movie ever. He hires rookie director Damien Cockburn (Steve Coogan) and five very different actors, who cause quite a stir in the press due to their very different backgrounds:

Naturally, nothing goes as planned, much to Cockburn's frustration. In a matter of days, the movie is way over budget and the actors won't cooperate. Having finally become fed up with the actors, and following the suggestions of the film's subject and consultant John "Four Leaf" Tayback (Nick Nolte), he decides to drop the actors in the jungle and simulate realistic warfare, hoping to get real emotions from them. This plan drives production even further off the rails when the cast runs afoul of a Laotian drug ring known as Flaming Dragon, and the actors end up having to become the soldiers they're playing, despite not knowing how to use their weapons or navigate through the jungle.

A critical and financial success, this rude, crude, and very funny film mocks the way Hollywood works and, to that end, it showcases filmmaking tropes like a peacock displaying his feathers, and the extremely Genre Savvy characters poke fun at them.

A spinoff focusing on the Les Grossman character has been announced. Little else is known about it.

Tropes used in Tropic Thunder include:

Grossman: This is Les Grossman. Who is this?
Flaming Dragon Mook: This is Flaming Dragon!
Grossman: Oh. Okay. Flaming Dragon. Fuckface. First, take a step back, and literally FUCK YOUR OWN FACE! *Beat* Now, I don't know what kind of Pan-Pacific bullshit power play you're trying to pull on me, but Asia, Jack, is my territory. So whatever you're thinking, you better think again! Otherwise I'm gonna have to head down there and I will rain down an ungodly fucking firestorm upon you! You're gonna have to call the fucking United Nations and get a fucking binding resolution to keep me from fucking destroying you. I'm talking about scorched Earth, motherfucker! I will massacre you! I WILL FUCK YOU UP!

Tyra Banks: Someone close to you said "One more flop and it's over."
Speedman: Someone said they were close to me?

Sandusky: You guys... did read the book, right?
Osiris:: I don't read the script, the script reads me!

Sandusky: "What the hell does that even mean?"

Rick Peck: "You don't need to explain to me why you need TiVo... or clean water. Clean sheets. Food. Shelter."

WOW. The insecurity level on you guys is RIDICULOUS!

Alpa: I'm sick of this koala-huggin' nigga... !!
[Kirk slaps Alpa, and then hugs him tight after Alpa tries to punch him]
Kirk: [with tears in his eyes] For four-hundred years... that word has kept our people down...
Alpa: [in total disbelief] ...What the fuck... ??

Portnoy: "How the hell do you know Chinese?"
Lazarus: "Land of Silk and Money with Gong Li. Second Globe, third Oscar. Prepped for that one by working in a Beijing textile factory for 8 months."