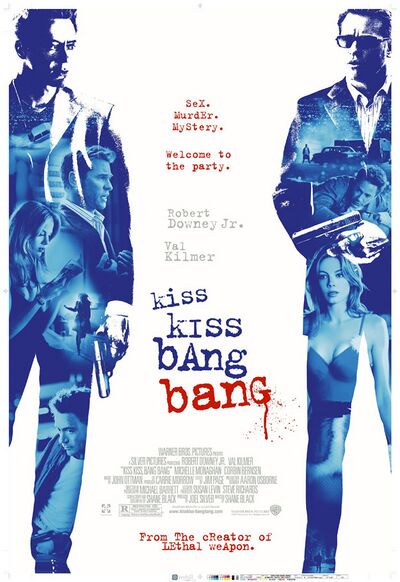 Kiss Kiss Bang Bang is a World of Snark comedy-Film Noir. The story is a parody of pulp detective novels set in the modern Hollywood entertainment scene. The film was a critical success, but a box-office bomb.

The film centers around--and is narrated by--Harry Lockhart (Robert Downey, Jr.), a down-on-his-luck thief who is mistaken for a method actor by a couple of movie producers after he barges into their auditions while fleeing from the cops. They send him to to Hollywood for a screen test where he encounters private eye "Gay" Perry (Val Kilmer) and Harmony Faith Lane (Michelle Monaghan), his childhood crush from his own hometown. Perry is supposed to give Harry a few basic detective lessons to make him more believable in his role, but their very first job together sees them witnessing a murder and the dumping of the body.

With a lot of bad luck, being in the wrong place at the wrong time, and through several cases of mistaken identity, Harry finds himself embroiled in a real life murder-mystery... just like the pulp novels he used to read as a kid. Applying what he knows from his reading, Harry attempts to be the good guy for once, get the girl, and live happily ever after.

Retrieved from "https://allthetropes.org/w/index.php?title=Kiss_Kiss_Bang_Bang&oldid=1830130"
Categories:
Cookies help us deliver our services. By using our services, you agree to our use of cookies.