Romance on the Set 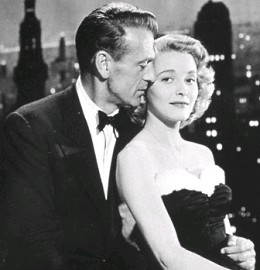 They posed for this shot, but they weren't acting.

A couple falls in love while working on a movie or TV show or album or tour together (sometimes another work), possibly even getting married and/or having kids. Seems to have a high breakup rate, but there are some long-lasting relationships that started this way.

What is actually being filmed is largely irrelevant. They're often a couple onscreen as well—when you spend all day pretending to be in love with someone, you may end up Becoming the Mask. However, it doesn't always happen that way. The point of the trope is that behind the scenes the two fall for each other.

The Muse is a Sub-Trope, which is about a male movie director falling in love with his lead actress. Cast Incest is another subtrope, namely the first type where the couple met while playing relatives, which adds a level of Squick before further thought reveals that it's no different from any other role.

In live theatre circles, the phenomenon is known as a "showmance."

Compare Actor Shipping, where the fans want this to happen.

Examples of Romance on the Set include: