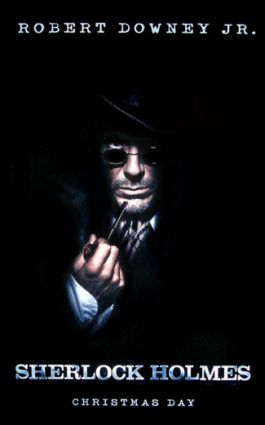 Holmes for the Holidays.

A 2009 film directed by Guy Ritchie, and starring Robert Downey, Jr., Jude Law, Rachel McAdams, and Mark Strong, that updates (or maybe restores) Holmes and Watson as thinking men of action. A sequel, A Game of Shadows, was released in December 2011.

When Holmes (Downey) and Watson (Law) interrupt a dark occult ritual and save a woman from being sacrificed, they find that the culprit is Lord Henry Blackwood (Strong). He's already killed five women in a similar manner and, before he is hanged, he claims to Holmes that he will kill three more times after his death.

Soon, Blackwood's tomb is found destroyed and his body is missing, sparking rumors that he has risen from the dead. Holmes has other problems, as well: Watson is getting married and is moving out, making the Blackwood case their last case together, and Irene Adler has shown up to hire Holmes for her mysterious employer.

A sequel in 2011 subtitled A Game of Shadows introduces Professor James Moriarty, a mathematician, former boxer and criminal mastermind behind a web of mysterious deaths and terrorist attacks across Europe. Holmes sets out to find out what he's up to but discovers Moriarty's mind is a match for his own, and a battle of wits across the continent begins as the two try to outsmart each other.

*While holding a gun on an assassin* I think it's time for you to leave (the train).

"Holmes, how many times must you kill my dog!?"

Holmes: What of the coffin?
Lestrade: We are in the process of bringing it up now.
Holmes: I see... Hmm... Right. At what stage of the process? Contemplative?

Watson: She loves an entrance, your muse.

Sim: What do you see?
Holmes: Everything. Such is my curse.

Watson: [after Irene breaks cover, guns blasting] She loves an entrance, your muse.

Moriarty: Rest assured. If you attempt to bring destruction down upon me, I shall do the same to you. My respect for you, Mr. Holmes, is the only reason you're still alive.
Holmes: You've paid me several compliments. Let me pay you one in return, when I say that if I were assured of the former eventuality - I would cheerfully accept the latter.

Holmes: No possible solution could be more congenial to me than this.

Holmes: I love what you've done with the place.

Holmes: "(in French) One moment, please."
Dredger: "(in French) I'm in no hurry." (and while he advances after saying so, he did let Holmes climb to his feet and speak)

Sir Thomas: Mr. Holmes, apologies for summoning you like this. I'm sure it's quite a mystery as to where you are, and who I am...
Sherlock Holmes: As to where I am, I was, admittedly, lost for a moment, between Charing Cross and Holborn, but I was saved by the bread shop on Saffron Hill. The only baker to use a certain French glaze on their loaves - a Brittany sage. After that, the carriage forked left, then right, and then the tell-tale bump at the Fleet Conduit. And as to who you are, that took every ounce of my not-inconsiderable experience. The letters on your desk were addressed to a Sir Thomas Rotherham. Lord Chief Justice, that would be the official title. Who you really are is, of course, another matter entirely. Judging by the sacred ox on your ring, you're the secret head of the Temple of the Four Orders in whose headquarters we now sit, located on the northwest corner of St. James Square, I think. As to the mystery, the only mystery is why you bothered to blindfold me at all.
Beat
Sir Thomas:Yes well...Standard procedure.

"The end is nigh! Blackwood's come back from Hell, and laid a curse upon this land! He walks in every shadow, and every puff of smoke. Behold, he cometh with clouds, and every ene shall see him and every soul shall wail because of him! You cannot stop him! No one can!"

Lestrade: "That's not Blackwood!"
Holmes closes his eyes in exasperation: "Well, now we have a firm grasp of the obvious."

Holmes: Madam, I need you to remain calm. And trust me, I'm a professional. Beneath this pillow, lies the key to my release.

Holmes: (points to Dredger) Meat...(points to two other Mooks with Dredger) Or potatoes?
Watson: My 10 minutes are up. (cue awesome fight scene)

Holmes: Beneath this pillow lies the key to my release.

Holmes: Madam, I need you to remain calm. And trust me, I'm a professional. Beneath this pillow, lies the key to my release.

Holmes: That's the Irene I know.

A Game of Shadows

Sim: What do you see?
Holmes: Everything. That is my curse.

Holmes: Has all my instruction been for naught? You still read the official statement and believe it. It's a game, dear man, a shadowy game.