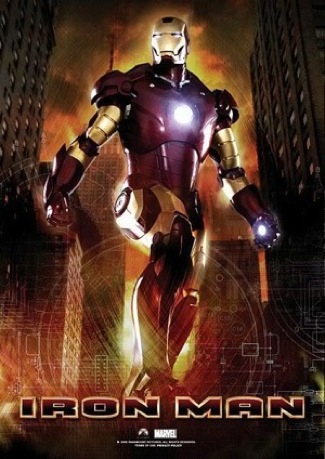 A movie series based on the Marvel Comics character Iron Man, starring Robert Downey, Jr. as the armored Superhero. The first two films were directed by Jon Favreau, while Shane Black will helm the third. Part of the Marvel Cinematic Universe.

After being captured by terrorists while on a missile demonstration, multi-billionaire Tony Stark uses his brilliant intellect to devise a Powered Armor to escape. Being an irresponsible, wealthy playboy before, he (literally) has a change of heart regarding his company policies and dedicates himself to cleaning up Stark Industries' patented weapons and taking care of the terrorist group that got their hands on them. To do so, he builds an even better suit of armor. He ignores that Obadiah Stane (his second-in-command in the company) has an agenda on his own...

Several months have passed by and Tony deals with the numerous consequences of outing himself as Iron Man and placing himself as the world's defender of peace. His first major issue is congressional hearings about sharing his tech, with rival industrialist (and perpetually second-place to Tony) Justin Hammer standing the most to gain. Despite their best efforts, Tony is untouchable: unbeatable in conferences and unstoppable as Iron Man. But his invincibility is tested by Ivan Vanko (Whiplash), a man with a grudge against the Stark empire who is more than capable of challenging Tony's genius, and he's also dealing with a slowly fatal medical condition resulting from his arc reactor implant. Black Widow also features in a supporting role and Jim Rhodes suits up as his alter-ego War Machine.

Filming begins in May 2012. It will possibly adapt elements from the Extremis storyline and will co-star Ben Kingsley as the villain, Guy Pearce as Dr Aldrich Killian, Andy Lau as an old friend of Stark's, Rebecca Hall as Dr Maya Hansen, and James Badge Dale as Eric Savin.

Retrieved from "https://allthetropes.org/w/index.php?title=Iron_Man_(film)&oldid=1963438"
Categories:
Cookies help us deliver our services. By using our services, you agree to our use of cookies.