Everything About Fiction You Never Wanted to Know.
Jump to navigation Jump to search
/wiki/Scott Steinercreator 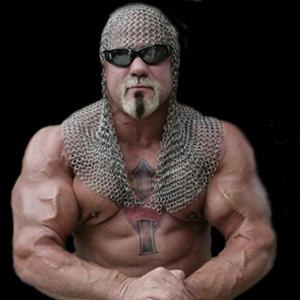 Big Poppa Pump, doing All The Tropes an egg.

"See through all my career, I've wrestled in alotta countries..."

Scott Steiner: Team 3D, you guys are outta your minds, comin' to Atlanta, Georgia, where the Steiner brothers got their start, in professional wrestling! You guys are outta your minds, makin' it a table match! This night, we're gonna beat you atchoo own game! And afters all's said'n'done, you're gonna be taking some splinters outta your FAAAT ASSES, all night night, cause you got some FAAAT ASSES! Know what chance you have? You have no chance, but you had a chance, was so could run lickety-split! But you can't run, 'cause you got some FAAAT ASSES! After all's sud'n'done, we're gonna have a tailgate party for ALL MY FREAKS out there, in Atlanta, Georgia!"

Scott Steiner, AKA Big Poppa Pump, AKA The Genetic Freak, AKA Scott Rechsteiner (real name Scott Carl Rechsteiner) is a wrestler maybe best known for his distinctive chainmail coif and multicolored beard, his obscenely muscled figure and his tendency to go overboard when presented with a mic.

He works either alone or as one half of The Steiner Brothers, a tag team with his real brother, Rick. He has worked in all three major promotions during the Monday Night Wars, ending up in WWE after WCW imploded, and joining TNA in 2006. His longest continuous runs with a promotion have been his 1996-2001 stay in WCW and his 2006-2010 stay in TNA.