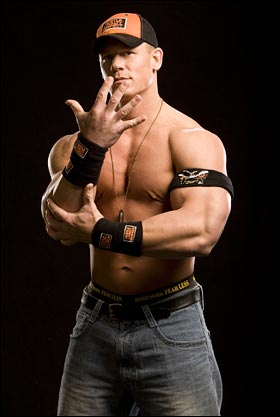 You can't see me!

John Felix Anthony Cena (born April 23, 1977) is a professional wrestler. The 21st century equivalent of Hulk Hogan, John Cena is one of the biggest, if not the biggest, superstar in World Wrestling Entertainment, with a nearly decade-long career that's seen him rise through the ranks of the company to become one of its biggest success stories, holding numerous titles and main eventing several Wrestlemanias in the process. He is currently competing on the Raw brand.

Additionally, Cena has also dabbled in rap music (including releasing a full album, You Can't See Me) and has starred in The Marine, 12 Rounds, Legendary, and The Reunion, films produced by WWE's film division.

He was picked by James Gunn to play Peacemaker in the film The Suicide Squad and the show Peacemaker.

You can read about his career in both wrestling and acting over at Wikipedia.

IF THIS PAGE GETS EDITED, WE RIOT

Retrieved from "https://allthetropes.org/w/index.php?title=John_Cena&oldid=1927563"
Categories:
Cookies help us deliver our services. By using our services, you agree to our use of cookies.