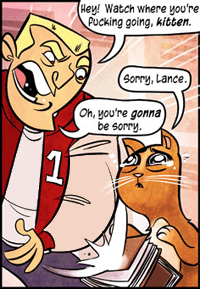 In every school, there's a Jerk Jock. See that tall, hunky and vulgar blond guy in the football letterman jacket picking on the Nerd over there? That's him.

The Spear Counterpart to the Alpha Bitch, the Jerk Jock is the Chief Bully who dominates the school/college environment through physical violence and threats of brutal retaliation. A boorish, obnoxious, spiteful asshole with an out-of-control sense of entitlement, he spends his time beating people up, getting drunk and destroying property; and in darker works, he may also be an incorrigible serial rapist. Just as the Alpha Bitch has a Girl Posse, the Jerk Jock has the Cool Crowd, a crowd of hangers-on who bow to his every whim and help him victimize whomever he decides to pick on. And he inevitably decides that Our Heroes are his favorite targets.

Like the Alpha Bitch, despite his largely repellent personality the Jerk Jock is surprisingly popular and can get away with most anything. However, where the Alpha Bitch uses her wiles and sex-appeal to get what she wants, the Jerk Jock usually isn't very smart and is more likely to fall back on fear of violent reprisal instead. Usually, violence is not an option to deal with him, unless The Hero or somebody on their side is indeed physically stronger than him. Other than that, manipulating him to his doom often proves being the more effective way, since he's seldom bright enough to see through intrigues and the fear of public humiliation, loss of status or his parents discovering his ways is often sufficient to keep him at bay.

Unlike the Alpha Bitch who almost always gets what's coming to her, the Jerk Jock is a frequent Karma Houdini in fiction. But if the heroes try to get revenge on him by alternative means, this will often result in an Anvilicious Family-Unfriendly Aesop about "not stooping to his level". If the hero does manage to take revenge, it will be glorious and extravagant to such a brutal degree that one wonders if the writers are working through issues from their own childhood. In other cases, when Karma eventually comes for him, we'll see the Jerk Jock all grown-up, probably either a Jaded Washout, dreaming about his glory days, or a failed corporate thug who ended up in jail.

In shows focusing entirely on school life, he'll be a primary antagonist; however, if the school environment is merely a setting and not the key focus he's more likely to be just a recurring nuisance for the characters to deal with, or a Villain of the Week. In shows dealing with the fantastic, he can often be found Mugging the Monster, or portrayed as stupid enough to bully someone even if he knows that they have powers that could reduce him to a smear on the wall.

Whilst it's not as common to get a sympathetic side to the Jerk Jock as with the Alpha Bitch, you'll sometimes get a softer version who isn't evil so much as an arrogant, self-absorbed Jerk with a Heart of Gold who doesn't really know any better. This version is much more likely to end up petting the dog, and may reveal his sensitive side in an Enemy Mine. He may also mend his ways and join the hero's side. And even while still a villain, the Jerk Jock can garner sympathy if he's given a Freudian Excuse (with being a "Well Done, Son" Guy or a brutal childhood the most common).

See Schoolyard Bully All Grown Up and Kids Are Cruel. Compare to, and sometimes may even overlap with, Big Man on Campus, who usually matches the Jerk Jock in popularity, but is less of an antagonistic force. Also compare Dumb Jock. Little relation to Violent Glaswegian.

Contrast with Lovable Jock, which is often deliberately done to show that not all jocks are like this.

Examples of Jerk Jock include:

Retrieved from "https://allthetropes.org/w/index.php?title=Jerk_Jock&oldid=1926929"
Categories:
Cookies help us deliver our services. By using our services, you agree to our use of cookies.