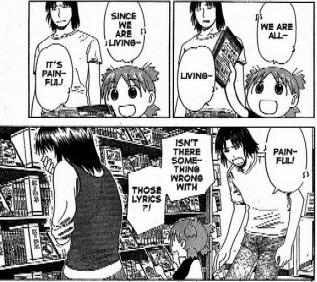 Yotsuba sings about the true nature of life.

Mondegreens are the phenomenon of mishearing lines, normally song lyrics, but poetry is also a frequent victim. Sometimes it's lack of correct enunciation, sometimes it's the speed or pitch that a lyric is delivered at, but often, a song lyric or recited poem will become famous not for what it says, but for what it sounds like it says to the careless ear.

For a more in-depth look at the history of mondegreens and how they're used in various media, please see the Analysis Page.

See also Lady Mondegreen, which is about something similar happening with character names in other works. Contrast Malaproper which is a character who mixes up words on a regular basis, and Beam Me Up, Scotty which is for when the misheard line becomes more famous than the original. A Gag Sub for a music video will probably be filled with mondegreens.

Note: Examples below should be In-Universe, or ones referenced in other works ONLY.

Examples of Mondegreen include:

Retrieved from "https://allthetropes.org/w/index.php?title=Mondegreen&oldid=1895148"
Categories:
Cookies help us deliver our services. By using our services, you agree to our use of cookies.