Everything About Fiction You Never Wanted to Know.
Jump to navigation Jump to search
/wiki/Sting (wrestling)creator 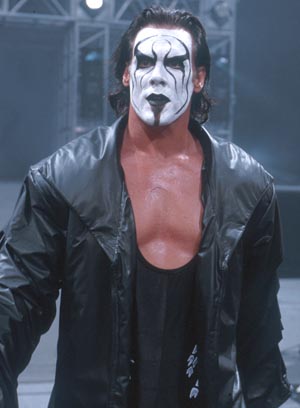 Steve Borden (1959-) is better known to wrestling fans as "the man called" Sting; he has served as a professional wrestler since 1985. The majority of his career was spent in WCW, where he became one of the company's biggest stars during the 1990s. Starting off as a bleached-blonde surfer-type, he eventually transitioned into the Crow-inspired look that he's retained to this day while feuding with the New World Order. Sting was a member of the WCW roster up until the company's demise in 2001, and wrestled in that company's last match, defeating longtime foe Ric Flair. Notably, Sting has never once worked for WWE in any capacity since WCW's demise[1], choosing instead to have control over his career and gimmick. In 2006, he became an on-again/off-again member of the TNA roster, and has been working in that promotion to date.

As usual, That Other Wiki has a nice, long article on his career.

(Do not confuse with the trope, the musician (Gordon Sumner), the film, the dagger used by Frodo and his Uncle, or the painful infliction of the same name.)

Sting (wrestling) provides examples of the following tropes:
Retrieved from "https://allthetropes.org/w/index.php?title=Sting_(wrestling)&oldid=1927681"
Categories:
Cookies help us deliver our services. By using our services, you agree to our use of cookies.