Everything About Fiction You Never Wanted to Know.
Jump to navigation Jump to search
/wiki/Stephen Frycreator 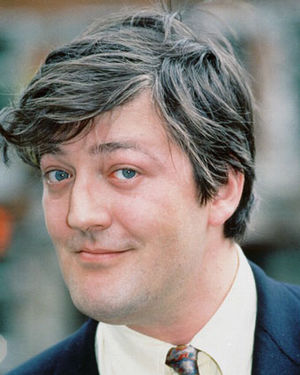 A man of intense intelligence and great coolness, Stephen Fry is the host of QI and starred in Kingdom, about the life of a rural lawyer. He has also written and contributed to several books, namely The Liar Novel, The Stars' Tennis Balls.,The Hippopotamus. and "Making History" (a time travel story about erasing Hitler from existence), as well as his autobiography Moab Is My Washpot (a second volume, called The Fry Chronicles, is now out), and The Book of General Ignorance. He is very much the modern day Oscar Wilde (though he's English) as well as a British national treasure.

A Cambridge graduate and a personal friend of J. K. Rowling (he won a Talkie for his reading of the Harry Potter unabridged audio-books), he has appeared as several Melchettes in Blackadder, played Jeeves in Jeeves and Wooster, portrayed Oscar Wilde in Wilde, and starred as Fry in A Bit of Fry and Laurie.

He is openly gay (90% gay anyway) - which might surprise some people - and open about having bipolar disorder. His early life resulted in him doing three months in prison for credit card fraud. On his release, he got a scholarship to Cambridge and joined the Cambridge Footlights, where he met Hugh Laurie through a mutual friend.

It is a sign of how well liked he is that when he vanished from a stage production he was a part of, literally missing his cue, and couldn't be found in the building, the British Tabloids published concerned stories asking him to come home, rather than the usual cruel mockery an actor would have got for such highly advanced stage fright. He only got a token mocking when he turned up in Belgium.

He also has a recurring role in Bones. He appeared in V for Vendetta (as Gordon Deitrich, a closeted comedy television show host]), as the Guide in the film version of The Hitchhiker's Guide to the Galaxy (mostly as a favor to the family of his late friend Douglas Adams) in which he also displayed his awesome musical talents in the soundtrack with the bonus techno-rap song "Reasons to Be Miserable", is the narrator of Play Station 3 game LittleBigPlanet (as well as the PSP game of the same name) and voiced the narrator in Pocoyo, Hedonistic Heroic Sociopath Reaver in the Fable games, and played the main character of Absolute Power. He made his directorial debut in 2003 with the film Bright Young Things, for which he also wrote the screenplay, adapted from Evelyn Waugh's 1930 novel Vile Bodies.

He's produced and hosted two very personal documentaries, HIV and Me and The Secret Life of the Manic-Depressive, which was the result of the aforementioned disappearance to Belgium and eventual diagnosis of bipolar disorder.[1] He was scheduled to write an episode of Doctor Who, but the idea fell through due to time constraints on his part.

In addition, he has a lovely comforting voice.

He featured on Top Gear in the "Star in a Reasonably Priced Car", having lost about seven stone before the episode, as he went on a diet. (Jeremy Clarkson: "Where's the rest of you?") Quite recently[when?] offended Polish Catholics by saying "We all know what side of the border Auschwitz was". Later apologized on his blog: "It was a rubbishy, cheap and offensive remark that I have been regretting ever since."

On the 28th of October, 2010, it was announced that he will be taking the part of Mycroft Holmes (Sherlock's older, cleverer, but indolent brother) in Guy Ritchie's Sherlock Holmes sequel. This is something of a Promoted Fanboy moment for him, as he says in his autobiography Moab Is My Washpot that he's been a fan of Sherlock Holmes since he was a small boy.

A self-confessed techie, averaging about a dozen Tweets per day, he is also a vocal supporter of Free Software while still being a diehard Apple fanboy[2], famously purchasing the second Mac sold in the UK after Douglas Adams (Adams always insisted it was the other way round but appears to have lost the argument by dint of dying first). Although he's also admitted that he does enjoy switching between a HTC Desire (an Android phone) and an iPhone in a recent Twitter post.

He now has his own theme song, courtesy of the good people known as Weebl & co, which enjoys definite Ear Worm status. As you may have surmised from this page, he has a very devoted fan base, some of whom are just mildly creepy, in a nerdily sweet sort of way.

Now go back and reread this entire page in Stephen's voice, if you haven't been doing so already. Cheerio.

Retrieved from "https://allthetropes.org/w/index.php?title=Stephen_Fry&oldid=1779099"
Categories:
Cookies help us deliver our services. By using our services, you agree to our use of cookies.