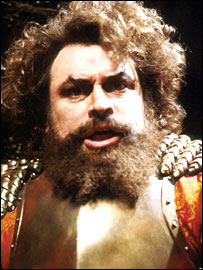 Perhaps best known in America as Prince Vultan of the Hawkmen in the Flash Gordon movie ("GORDON'S ALIVE?!" "DIIIIIIIIIVVEEEEE!!"), he is widely regarded as one of the Largest Hams in existence. However, he is by nature a stage actor, and his hamming is by design, not by ineptitude or accident. As he has proven on (very) occasional films, he is actually capable of delivering a subtle and understated performance; he just usually doesn't bother (and is probably aware of why people hire him). His crowning moment of hamness is the Blakes Seven episode "Cygnus Alpha" in which just about every line he speaks could be replaced with "Did somebody order a Large Ham?". He keeps in shape by climbing up large mountains. About the only thing on Earth larger than BRIAN BLESSED is Mount Everest, which he has attempted to scale three times without quite reaching the summit each time. No doubt due to his hamminess causing an avalanche to send him tumbling down (he had to rescue a companion who broke his leg on one occasion, halting a mere (mountain climbing terms) few hundred feet from the summit, according to that nice Mr Fry, off of the telly).

In 1977, he appeared as the villainous hunter Brod in the third season Survivors episode "Law of the Jungle". He put in a performance that for anyone else would be over the top. For him, it qualifies as subtle. "You're not a tax inspector, are you, Charlie?!"

He served up not one, but two large portions in Space: 1999; the first as Dr. Cabot Rowland in first season episode "Death's Other Dominion", the second as Maya's father Mentor in second season opener "The Metamorph". In real life his favorite food is cows, which he eats whole and in one gulp. (Seriously, though, he's a vegetarian and regular meditator).

Was also in the first season of Blackadder as King Richard IV ("Chiswick! Fresh horses!"). Was far less hammy as the ghost in fellow large ham Kenneth Branagh's Hamlet (he even managed to whisper loudly) and Signore Antonio in Branagh's Much Ado About Nothing. Also, the Duke of Exeter in Branagh's Henry V. ("What treasure, Uncle?" "Tennis balls, my liege!") Surprisingly, Keanu Reeves claimed in an interview on British radio that during filming of Much Ado About Nothing Blessed befriended him and taught him to meditate. Moviegoers who are sympathetic to Reeves might have thought it more likely the other way round. Blessed may be calmer than apparent. During the filming of Prisoner of Honor he reportedly managed to keep Oliver Reed sober by sheer force of being big and scary.

It is said by some that the character of Destruction (a sentient personification of difficult changes who has quit his job to become an artist) from The Sandman is based on him. Since author Neil Gaiman is one of the ones who says this, it is perhaps true but no less unlikely.

Played his best and his favourite role as the sympathetic, tragically naive (yet still occasionally bombastic) emperor Augustus in the acclaimed British mini-series I, Clavdivs. ("IS THERE ANYONE IN ROME WHO HAS NOT SLEPT WITH MY DAUGHTER?!!!")

This Roman role, and seemingly his delivery, were referenced with a cameo in Gladiator, in which - despite appearing in only three frames of film - Blessed's characteristic roar can be heard to demand 'KILL HIM!' clearly above the din of the crowd.

Played his part in the development of the British cop show by being Cowboy Cop "Fancy" Smith in Z Cars, the villain in the first episode of The Sweeney and a corrupt cop in an episode of Minder.

Known to British viewers as Spiro in the 1987 version of the TV series My Family and Other Animals.

Outside of acting he has made several attempts to climb Mount Everest, although it's hard to see why - all he really needs to do is stand next to it (or possibly glare ferociously until it crouches down in submission). He is also the oldest man to have reached the North Pole on foot and until recently held the record for the highest Everest ascent without oxygen.

Appeared in Have I Got News for You, in a bizarre performance which was possibly so good it broke time. We'll just have to wait and see.

Also with Paul Merton he appeared on Room 101 demonstrating that his loudness was a choice in response to the guest wanting to put unnecessarily loud people in room 101. Blessed took the role of a whispering snooker commentator.

Recently appeared in The Wrong Door as Captain Goitier the train pirate.

He's also appeared in Disney's animated adaptation of Tarzan as Clayton, and went on to repeat the same role in Kingdom Hearts. His performance was still quite hamlike. He also provided the "Tarzan yell" for the film. His voice performance of Boss Nass (the Gungan king) in Star Wars: The Phantom Menace was equally over the top and possibly the most fun performance in the entire movie. Additionally, he narrated Viking: Battle for Asgard in which his narration stole the show and catapulted said game into the halls of awesome!

He also appeared in original series Doctor Who: ("Trial of a Time Lord: Mindwarp") and uttered the immortal line: "Today prudence shall be our watchword. Tomorrow we shall soak the land in blood!" Hamtastic! He then ended up either killing Peri after she got a slug's brain transferred into it, but then actually marrying her, coming from The Valeyard and The Master, who are both Unreliable Narrators. Hell, he might have done both; he's just that sort of guy. It was here that he met his only true rival for loudest being in the universe. The Sixth Doctor and his coat. Mindwarp is regarded by some as being the hammiest production ever.

He had no lines in the almost-dialogue-free short film Exam Conditions, and still managed to be the loudest person in the film.

He was the first to play old Deuteronomy in Cats. He was the one who came out after the show finished to tell the audience that there was a bomb alert.

He somehow managed to raise a son with an American accent in Robin Hood: Prince of Thieves, and still was the loudest person in the film, even on his character's last line: "God!! And Kinnng Richaarrd!!! Yaaarrrrrrrggggghhhhh!!!!!"

He taught MacGyver archaeology as part of Mac's Expansion Pack Past as seen in the Lost Treasure of Atlantis telemovie.

He has also been sighted presenting Unbeatable Banzuke, enthusiastically, in the guise of "Banzuke Brian" attired in what appears to be red plastic faux-samurai armour several sizes too small, on the UK's Challenge telly channel.

When not actively being a Large Ham (or sometimes at the same time, actually), Blessed is also an archetypal Boisterous Bruiser.

Before being lost in a general revamp, his page on The Other Wiki described him as "highly charismatic" in the first paragraph. Apparently, their strict NPOV policy has no bearing here: "he is a highly charismatic man" is not simply an opinion, but an objective statement of fact.

Even when playing Santa to introduce the Music Channel's 'Magic's Christmas Top 50' he manages to be a wonderful ho-ho-ham.

Along with Diana Rigg and Jeremy Clarkson, he's from Doncaster. The fact that Doncaster is now also home to an extensive school and college for the deaf may not be coincidental.

He was cast as Odin in Thor, a part Blessed was born to play, but then Anthony Hopkins got the part instead.

After a campaign by fans, tomtom have worked with Brian to record a voice track for their satnav appliances. The campaign's own demo video starring Brian himself can be found here on YouTube. His excited thanks to the 25,000+ people who signed up for the campaign can be found here. In response to their success, Brian suggested in an interview that somebody should make a campaign to send BRIAN BLESSED to the moon. Someone must have done something along those lines, because in 2014 he's going into space! Straight from the man's mouth on Russell Howard's Good News, Episode 10, Season 8 (2013):

Author Neil Gaiman is deadset on having Blessed play the role of Destruction in a movie adaptation of The Sandman comic series.

Happily Married, he reportedly once accused his daughter's boyfriend of dating her to get close to him, he may have been joking. Old Friend of Patrick Stewart who he describes having known from age 9 and studying Shakespeare in his home. Mentions his father being adamant that his son wouldn't follow him down the mines.

He was in the running to be elected Chancellor of Cambridge University. Despite a compelling speech, Lord Sainsbury won instead. Bollocks.

In his personal life, Blessed is a mild-mannered and soft-spoken man, who spends a lot of time caring for abused animals.

He's so loud, even his handwriting is shouting!

Retrieved from "https://allthetropes.org/w/index.php?title=Brian_Blessed&oldid=1886628"
Categories:
Cookies help us deliver our services. By using our services, you agree to our use of cookies.