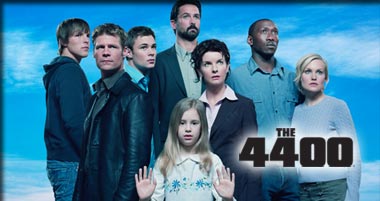 The basic premise is that four thousand, four hundred people from the past century have been abducted, then Touched by Vorlons, and returned to the present day. They have not aged and they do not remember their abductions.

Many of the returnees discover that they have new abilities, such as telekinesis, mind control, clairvoyance, or unnatural control of phlebotinum.

The main characters are Homeland Security agents investigating the 4400. A small group of 4400s are regular characters. Episodes combine the Myth Arc with a "Freak of the Week" (see below.)

Retrieved from "https://allthetropes.org/w/index.php?title=The_4400&oldid=1921618"
Categories:
Cookies help us deliver our services. By using our services, you agree to our use of cookies.