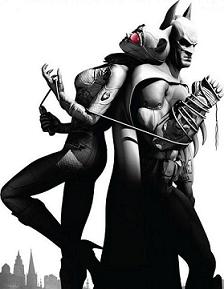 As awesome as it sounds.

When the hero of the show and one of the antagonists have a romantic tone, either as subtext, or, less commonly, right out in the open. This allows a degree of tension into the relationship, and as long as you make sure the antagonist is less of a "villain", we're allowed to root for them.

Their slightly different senses of morality will conveniently keep things from progressing too quickly out of the writers' grasps; and sometimes they won't move much at all, since the character may not be as fun if they go straight. The same concerns about getting rid of the dramatic tension that fuel Will They or Won't They? apply here.

Compare Go-Karting with Bowser, Loves My Alter Ego, or Capulet Counterpart. Almost always a part of Villainesses Want Heroes. May lead to The Masquerade Will Kill Your Dating Life if the pairing is ultimately incompatible or too unstable. The one-sided version of this may be a Villainous Crush. See Foe Yay for the less explicit version of this, and Fatal Attraction when it's more dangerous.

Has nothing to do with dating a Catgirl. Usually.

Examples of Dating Catwoman include:

Retrieved from "https://allthetropes.org/w/index.php?title=Dating_Catwoman&oldid=1953322"
Categories:
Cookies help us deliver our services. By using our services, you agree to our use of cookies.