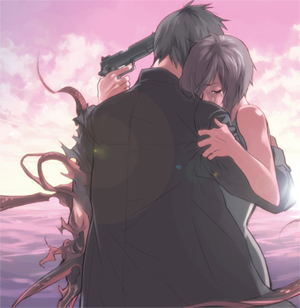 Alice is mortally wounded and in such pain that she can't stand it anymore, and her loved ones can't bear to watch her scream. There may be a Body Horror that nobody can figure out how to destroy, and Alice has been taken over to the point where she cannot even ask for death. Or Cold-Blooded Torture has left her horribly maimed and screaming incoherently. Or perhaps she's about to succumb to The Virus or The Corruption, and she wants to Die As Herself. Or some other Fate Worse Than Death. It may be that she could survive, but they have no access to medical care; or that Alice, if she lived, would be reduced to a shell of her former self. At any rate, Alice is dying in agony, the villain is gloating and nothing else can be done. The only merciful thing to do is end her pain as quickly as possible.

An Instant Death Bullet is likely, and justified in this situation: the killer has no difficulty getting to a position and attacking in a manner that would cause quick death. There is usually a moment when a glimmer of self-awareness allows Alice to show her gratitude through a tearful smile or the like—however implausibly. This is usually easier when the shooter is Cradling Their Kill.

When several people could do it, it is likely that her closest friend will insist on being the one to give the fatal blow; compare Dying Alone.

The Medic, if holding to Thou Shalt Not Kill, may make an exception for these.

Note that in Real Life, this practice is extremely controversial. In either case, it is usually an incredible Tear Jerker.

Not to be confused with Put Them All Out of My Misery.

Compare the combat-ending Coup De Grace, the villainous Thwarted Coup De Grace, and the assisted-suicide I Cannot Self-Terminate. A subtrope of Shoot the Dog, whose trope namer was a Mercy Kill.

Examples of Mercy Kill include:

Retrieved from "https://allthetropes.org/w/index.php?title=Mercy_Kill&oldid=1948715"
Categories:
Cookies help us deliver our services. By using our services, you agree to our use of cookies.