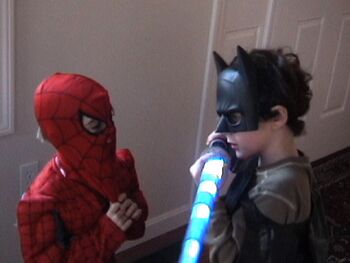 Maybe if you believe really hard, you too can be Batman wielding a lightsaber.

The opposite of I Just Want to Be Normal, this is a character who is completely ordinary and unexceptional. And they desperately wish that they weren't. Either that or they have a very ordinary, uneventful life that they wish was fun and exciting. They would have Jumped At the Call, but the call never came. Very often, they are more than a little jealous of their friends who did get cool powers (as in the opening quote) or get to go on exciting adventures. If they're lucky enough, they may get to be the Badass Normal in their group of magical friends.

If they finally get what they want, they may become the Ascended Fanboy. Otherwise, they either Ascend and get slammed by the Sidekick Glass Ceiling or wind up Desperately Looking for a Purpose In Life.

Like the other I Just Want To... tropes, this is frequently used to the audience's own desires. If the character gets what he wants, he serves as a surrogate for the audience who want to be able to do the same at least in their imagination. If he does not, it's usually meant as encouragement for the viewers: "See, you should just be happy with the boring life that you have! And being special is overrated anyway!"

May lead to a Be Careful What You Wish For situation.

Compare I Wish It Was Real, Changeling Fantasy, The Call Put Me on Hold, I Just Want to Be Beautiful, The Team Wannabe.

Contrast I Just Want to Be Normal.

Examples of I Just Want to Be Special include:

Retrieved from "https://allthetropes.org/w/index.php?title=I_Just_Want_to_Be_Special&oldid=1968560"
Categories:
Cookies help us deliver our services. By using our services, you agree to our use of cookies.