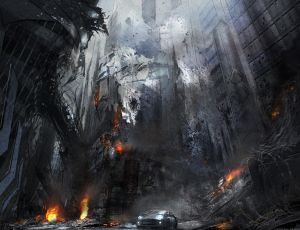 One of the more common Alternate Timelines. The heroes are sent into the near future, and while they were gone the world became a crapsack, usually because the villain(s) took over. Nine times out of ten the hero will meet La Résistance and/or Future Badass versions of his friends who were left in the past, though they will of course usually appear older and/or more haggard (due in part to them presencing, and possibly being part of every event which led up to this time). The plot typically ends with the characters going back in time so they can Set Right What Once Went Wrong, so this future can never happen.

Conveniently, in many cases the catalyst that ruined the world was the absence of whoever was sent to the future. Thus all the heroes have to do to fix things is return to the present.

Technically Dystopian, but doesn't fit that trope description well as it's usually ascribable to a single villain-related event. It's a good (or cheap, depending on the execution) way of becoming Darker and Edgier and adding tension while working under Status Quo Is God. If a series gives only a brief glimpse of the Bad Future instead of actually going there, it may be Story-Boarding the Apocalypse. If the villain manages the first step towards its creation, he's made a Villain World.

If this happens to a character from the past to "our" future, then they've entered a Bad Present. If the reason the bad future is so bad is because The Bad Guy Wins, it's a Villain World.

Good Future variations are practically unknown, since knowing that the future is going to turn out okay removes any dire need for the characters to change things in the present. They do sometimes appear as an epilogue to show that the heroes did in fact succeed in changing the future.

Examples of Bad Future include:

Retrieved from "https://allthetropes.org/w/index.php?title=Bad_Future&oldid=1930507"
Categories:
Cookies help us deliver our services. By using our services, you agree to our use of cookies.