Everything About Fiction You Never Wanted to Know.
(Redirected from Useful Notes/Sarah Palin)
Jump to navigation Jump to search 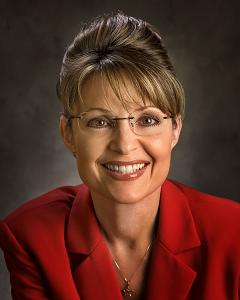 The former Governor of Alaska, Sarah Palin was abruptly thrust onto the pop culture radar by becoming Republican presidential nominee John McCain's running mate during the 2008 United States presidential election against Democrats Barack Obama and Joe Biden. She was the second female vice-presidential candidate from a major party in US history (the first being Geraldine Ferraro in 1984), and the first from the Republican Party. In July 2009, Palin resigned her position as governor with 18 months remaining in her first term, one of the official reasons being saving the costs to the Alaskan budget of defending herself against detractors; said detractors have naturally offered a different explanation. Since then she has toured the country as a paid speaker and founded the conservative political action committee SarahPAC.

Palin was widly mocked by pop culture. Early on she was an asset to the McCain campaign, despite the apparent last-minute choice and lack of thorough vetting. She made a strong, well-received speech at the Republican convention and gave the McCain campaign a much-needed bump in the polls. However, when she was interviewed by Katie Couric of CBS Evening News (only Palin's third interview since being selected as running mate), she confounded viewers with her incoherent answers. This ended up turning her into huge comedic fodder for programs like The Daily Show, and this was cemented with a Saturday Night Live sketch starring Tina Fey that parodied the interview... without even having to change very much of the dialogue.

From that point onwards, Palin's public persona has largely been defined, rightly or wrongly, by her So Bad It's Good absurd politispeak. Conservative politicians in general are considered Acceptable Targets, and the Couric interview turned Palin into a lightning rod for it. When she appears or is referenced in most fictional media, she will take on these traits largely because it's funny. There are shows out there which try to treat Palin as a more serious, dignified individual, but these simply don't have the same Popcultural Osmosis value. It's a matter of contention whether she caused McCain's campaign to Take a Level In Badass by adding needed enthusiasm to it, or if she was McCain's Poisonous Friend who hurt him with more people than helped. What isn't contested is that her post-Obama popularity far exceeds McCain among her party, becoming a major conservative organizer, with endorsements actively sought by candidates, while McCain is reviled for his increasingly liberal positions (most prominently being the deciding vote against repeal of Obamacare).

Incidentally, anyone looking for a nuanced and balanced political discussion of Palin's influence in America is on the wrong wiki. Your typical Palin reference in most media will either involve Alaska, that she has a child with Down Syndrome, parodying her style of political speech (including the fact that her accent sounds exactly like Marge Gunderson in Fargo), her being more attractive than the typical politician, or some combination of the four. Her actual political value, as far as we can tell, has very little to do with these things.

As just a few moments' worth of internet research can handily show (or just look a few inches up or down from this sentence), Palin has a Hatedom white-hot enough to be seen from space, yet it seems just as many people love her—possibly because she can unintentionally make left-wingers froth at the mouth even better than Ann Coulter can on purpose. So please, for the love of God, when discussing her, think before you edit.

The Popcultural Osmosis does not seem to be slowing down either, as a recent reality show about Alaska stars Palin and was TLC's highest-rated premiere. Unfortunately for Sarah, it was not renewed for a second season.

Some men who lean towards Meganekko have been pleased to see that since this woman who openly wears eyeglasses got so much coverage and so close to the vice presidency that the tendency of some western women to hide their need for eyeglasses behind contacts has abated just a little.

No relation to Michael Palin.

Sarah Palin provides examples of the following tropes:
Sarah Palin has been portrayed in:

Retrieved from "https://allthetropes.org/w/index.php?title=Sarah_Palin&oldid=1936597"
Categories:
Cookies help us deliver our services. By using our services, you agree to our use of cookies.