Everything About Fiction You Never Wanted to Know.
(Redirected from Ke$ha)
Jump to navigation Jump to search
/wiki/Keshacreator 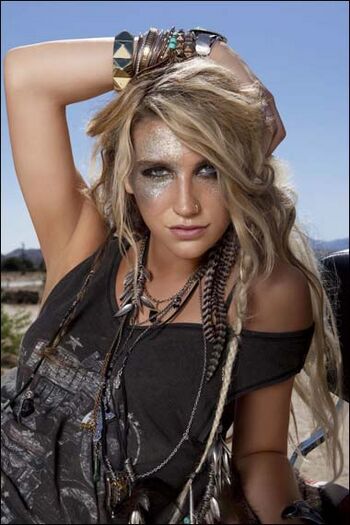 "Because a girl should be able to down copious amounts of liquor and puke in the bathtub the next morning just like a guy, dammit!!"

Kesha Rose Sebert (pronounced as Kesh-uh, born March 1, 1987), known by the mononym of Ke$ha from 2009 until 2014, is a singer/songwriter, pianist, guitarist, rapper and musician. Ke$ha was born in Los Angeles, but raised in Nashville, Tennessee. Her breakthrough single came in early 2009 after appearing on Flo Rida's number one single "Right Round". She wrote songs for Miley Cyrus, The Veronicas and worked on Lace And Leather for Britney Spears before she hit the big time.

Her debut single, "TiK ToK", and album, Animal followed shortly afterwards in 2009 and 2010, respectively, then she did an EP "Cannibal" featuring successful songs like "We R Who We R", "Blow" and "Sleazy". Currently on the Sleazy tour, world wide.

Her Signature Style can be roughly summed up as Retraux-style Synth Pop with tomboyish lyrical themes and Auto-Tune up the wazoo. No, really.

"So, I grabbed the bear by the throat, looked him right in the eyes, and I said 'Bear, you have 'till the count of zero to put some pants on and to apologize to the President.' And, um…that's the story of how I was elected to the Parliament of Uzbekistan."