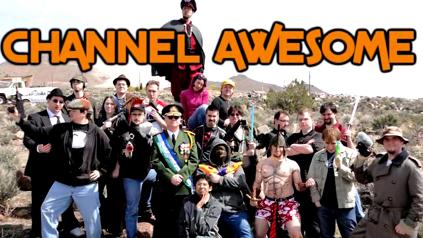 Alright people, this is the moment you've been waiting for! Bravery will be rewarded! Destinies will be revealed! And the honor of a new nation will be born! A nation which I will declare--KICKASSIA! [1]

A tale about dreams of glory. A story of conquest, victory and defeat. A classic fable of one man's quest for power, forever shadowed by the cloud of insanity...

Kickassia is a feature-length, six-part original web presentation created by Doug Walker and the rest of the gang at Channel Awesome, including The Nostalgia Chick, Linkara, Spoony, The Cinema Snob, Marz Gurl, and Angry Joe (among others), in honor of the site's second anniversary. The plot concerns The Nostalgia Critic, eager to own his very own country, deciding to organize an assault on the Republic of Molossia a one-acre independent nation within the continental United States and usurp its president, Kevin Baugh. Hilarity, as well as movie references and heavy artillery, ensue.

The series started on May 17, 2010, with a new installment posted online per day. The series is as follows:

DVD can be found here!

Not to be confused with the comic and film titled Kick-Ass.

Tropes used in Kickassia include:

Retrieved from "https://allthetropes.org/w/index.php?title=Kickassia&oldid=1964513"
Categories:
Cookies help us deliver our services. By using our services, you agree to our use of cookies.